Despite my 'little bug' the last 24 hours, this was a great trip. We have nine states to see, and three years left to do it while Paradis is still at home (see Master Plan tab above).

I didn't start planning this trip until just a couple weeks before we left. At the time I was feeling overwhelmed with the 20+ hours I spent planning, researching, scheduling, and adjusting. I asked myself, "Why don't we just go to Florida and spend a week on the beach?" Oh how simple that would be ... but after traveling 11 days with these three I'm reminded why I love these trips so much.

First, I love this country. There is so much to see and do and I'm glad that my girls get a chance to explore it as well.

Second, I simply love spending time with my three traveling companions. Scott and I began our relationship traveling, and for some reason we do it so well together. I love to watch Paradis and Annelies navigate through the challenges we face on our trips, and explore all the sites we visit with such interest.

Third, although my kids are teenagers, and at times drive me completely nuts, I'm reminded during these trips that they are really good kids. You figure that out when you need them to push you in a wheelchair to the bathroom airport!

Thanks for following us on our adventures. Your emails and comments keep me motivated to continue posting. Happy Travels everyone!

For those of you that have seen the movie Bridesmaids, the next thing that happened on our trip was the scene where the girls went to pick out their dresses. If you haven't seen the movie, and want to know what I'm talking about, you can watch the scene here. Warning: Small amount of profanity. By-the-way I love, love, love that movie ... but I'm having second thoughts after living it!

The previous night was pretty mellow. I thought it was a little weird that I fell asleep at 8:00pm, but just six hours later I found out why ... I was sick. Sicker than a dog actually. Trust me, it was the scene from Bridesmaids all over again. I felt horrible. 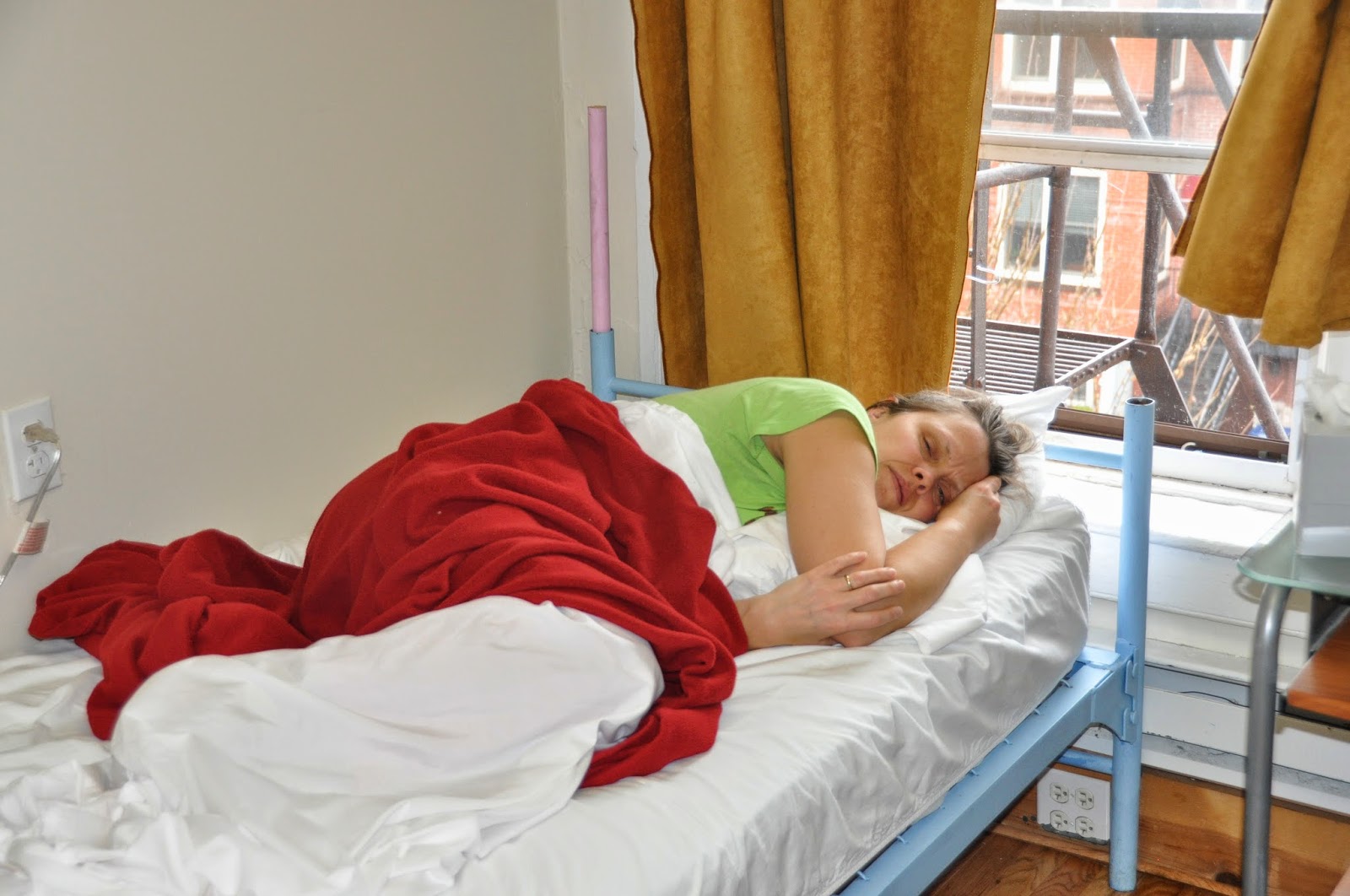 Let me remind you, we were staying in a Hostel. We had a room to ourselves, but we shared a bathroom with four other people. What a nightmare. Our room had an electronic key entry, so every time I had to go to the bathroom I would leave the door ajar as it took too long to open the door and my brain wasn't functioning enough to remember the code. However, it turned out Scott was getting up throughout the night as well, would see the door ajar, and get up to lock it once again (along with closing the chain lock!).  He was thinking someone knew our code and was sneaking in our room. I was so sick I didn't have the energy to wake him up and ask him to stop touching the lock!!!! You couldn't make this stuff up people ...

Despite my lack of movement Sunday morning, Scott and the girls rallied. After finding me a bed to sleep in for the day they were off to check out the Washington sites one last day. They began at the 300 year-old Japanese stone lantern that was given to the City of Washington, to commemorate the Cherry Blossom Festival. After taking a couple pictures for me, Paradis said to Scott, "Look Dad, the darn thing isn't even lit!" Scott tells me the rain and hail was pelting down so hard it didn't have a chance! 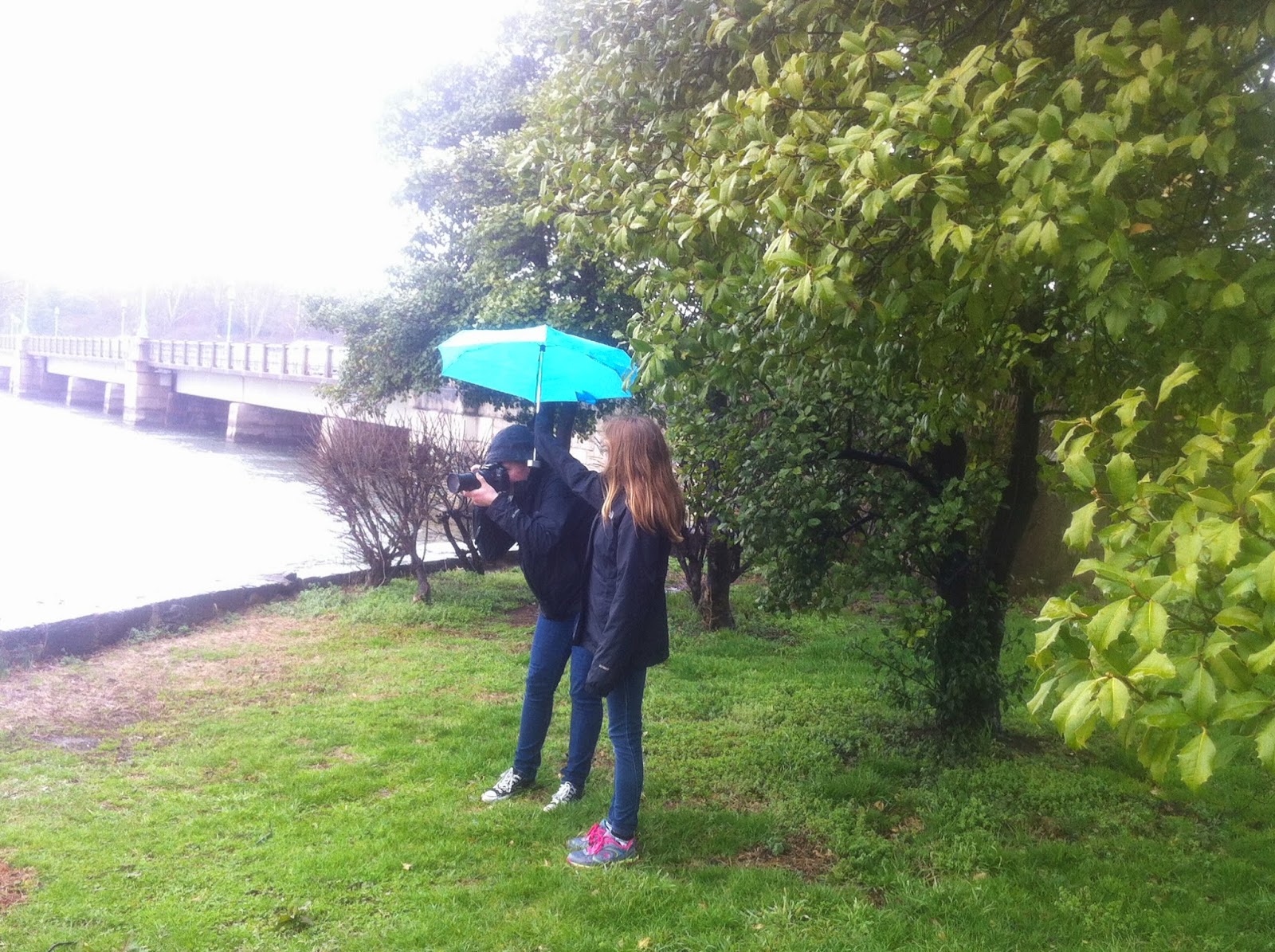 Scott said the hail hurt his bald head so badly he had to put a Ziploc bag on it! No lie. 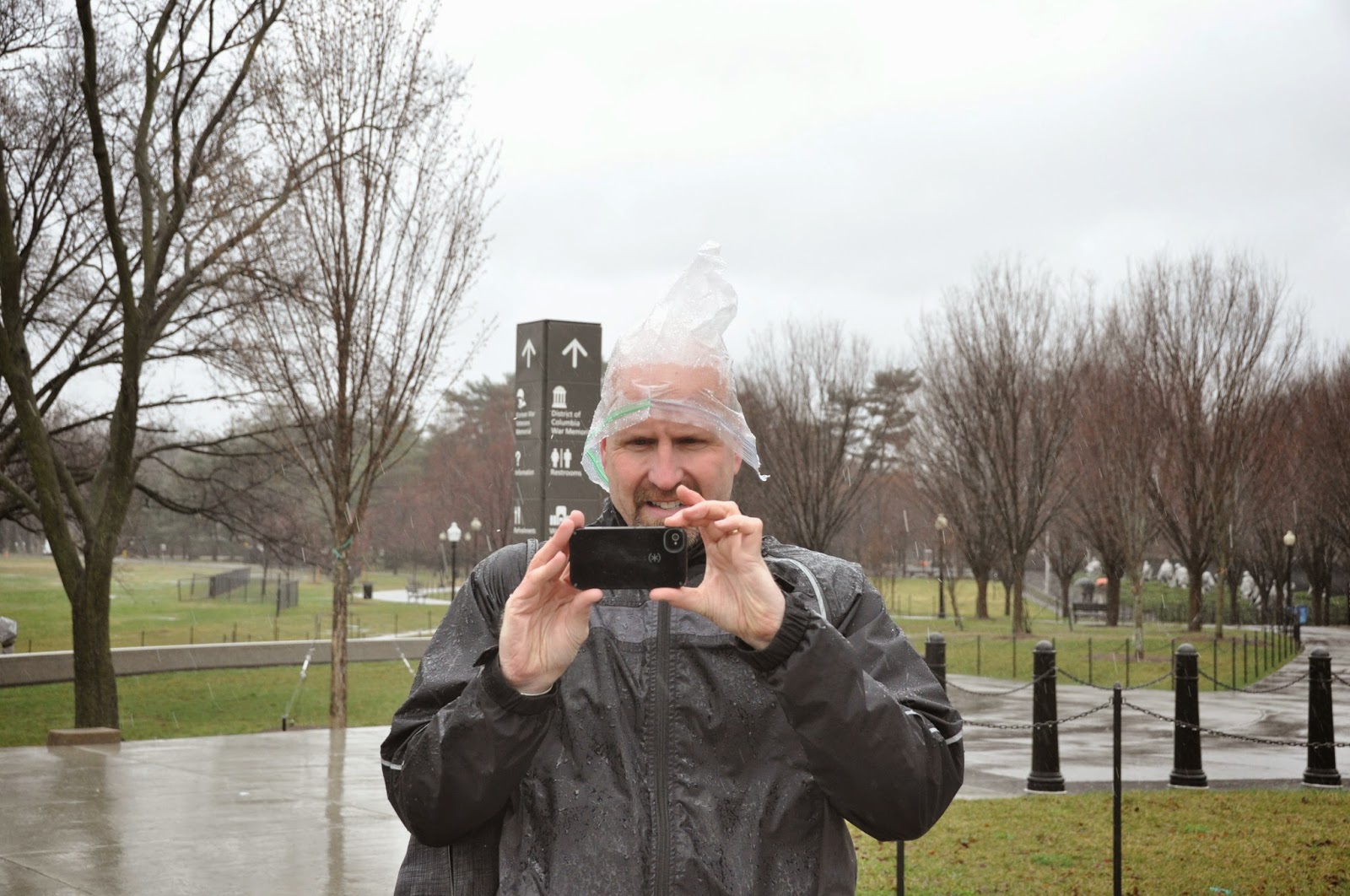 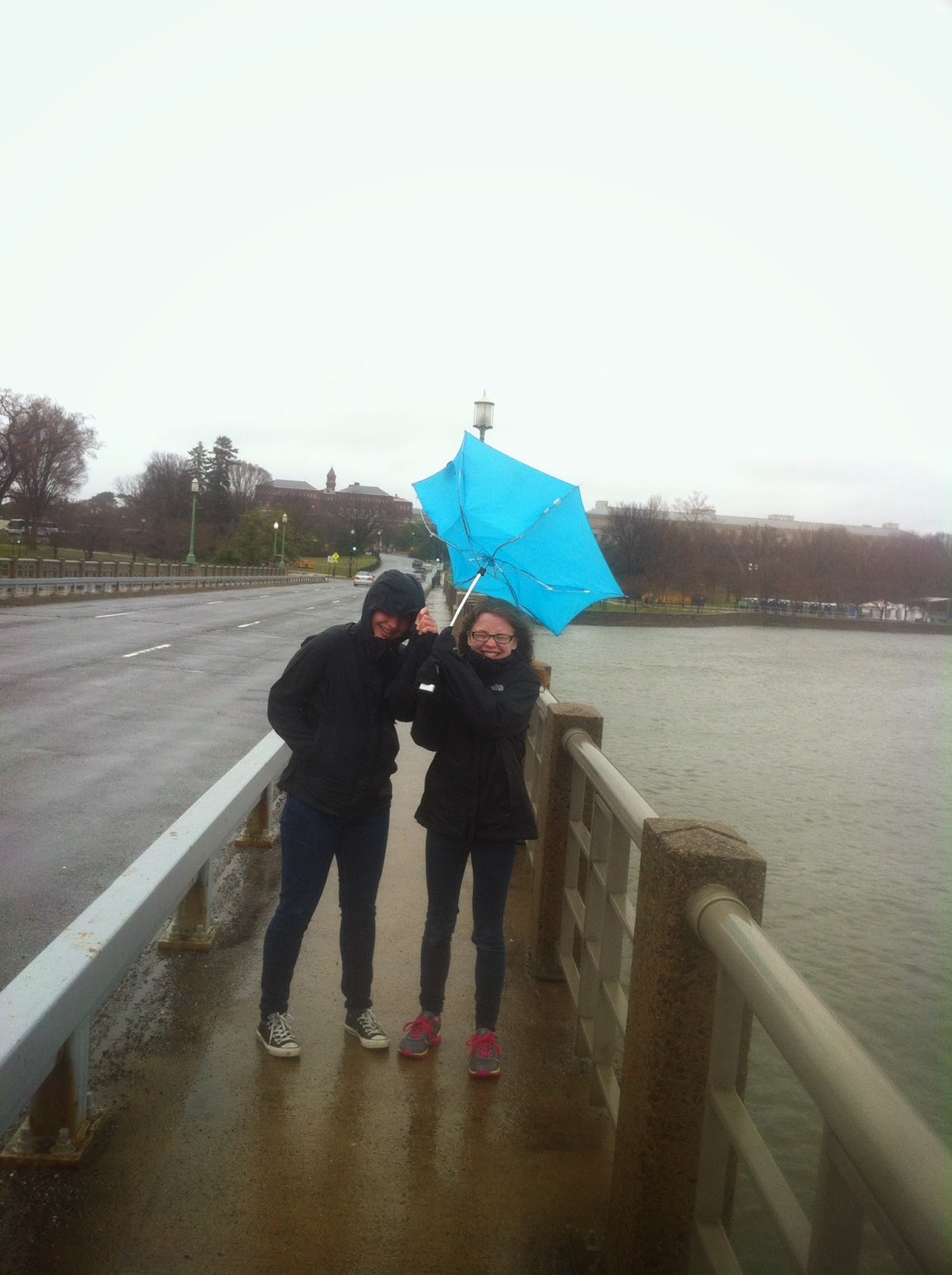 While telling me stories from the day, Scott says he got tears in his eyes when he told the girls, "I really want to see Lincoln's Monument. Do you mind if we stop there?" The girls were troopers, and agreed to walk through the rain and cold! 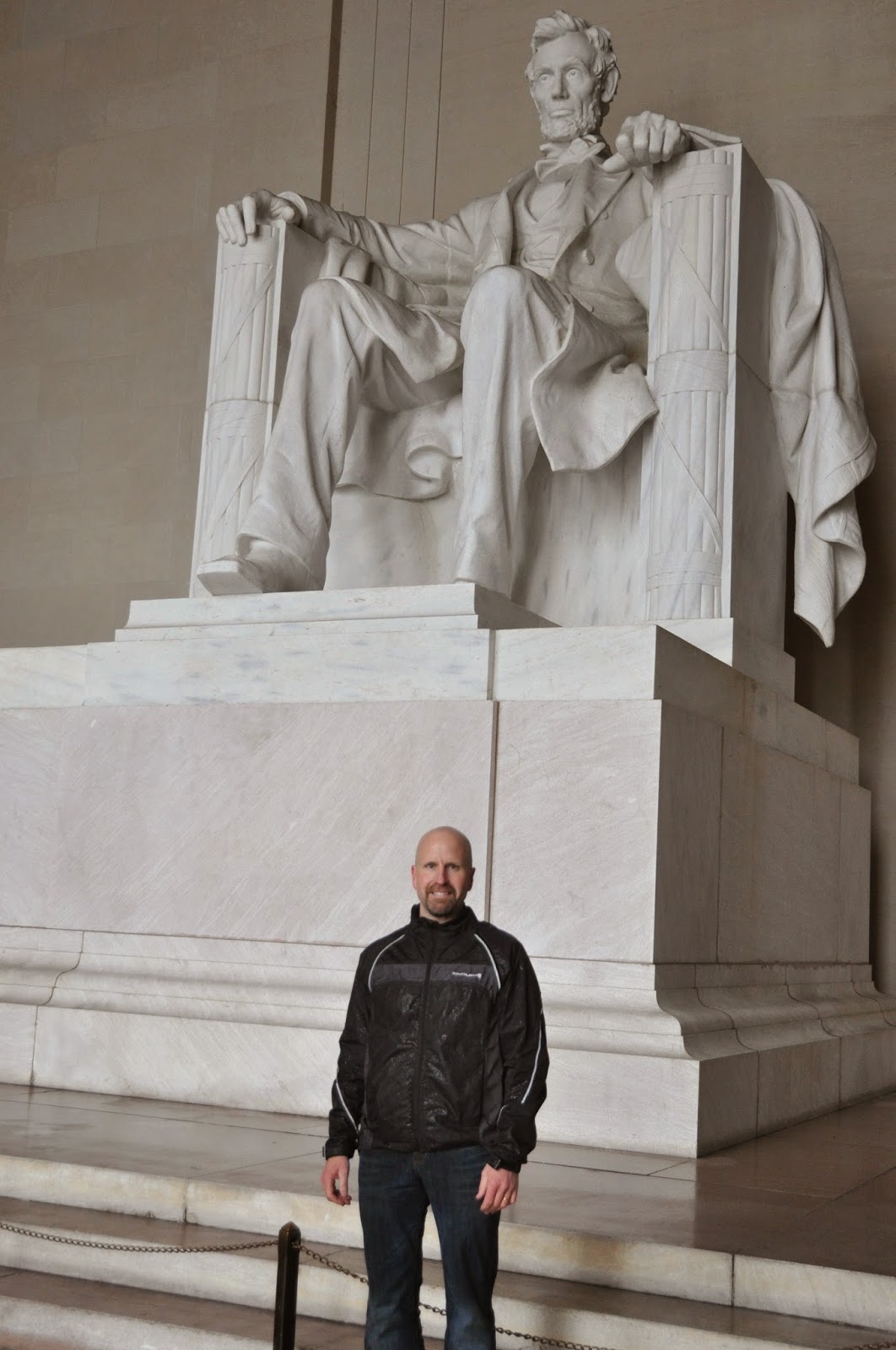 They hailed a taxi (for us frugal travelers only sleet and snow would allow such an expense), and went to the National Archives. Scott says the girls could have stayed another two hours, but they had to return to pick up the invalid.

All I had done for the day was sleep, run to the bathroom, and sleep. I attempted a shower, but laid in bed completely naked for an hour afterwards because it had wore me out so much I couldn't even get dressed. Whatever illness I had, took over my body, and I was having huge doubts I could get on the plane to fly home that evening. But my traveling partners carried all the bags, and I took a lot of short breaths to hold back the vomit, as we boarded the Metro one last time for the airport. Once there, we got a wheelchair, and I made it to the gate. 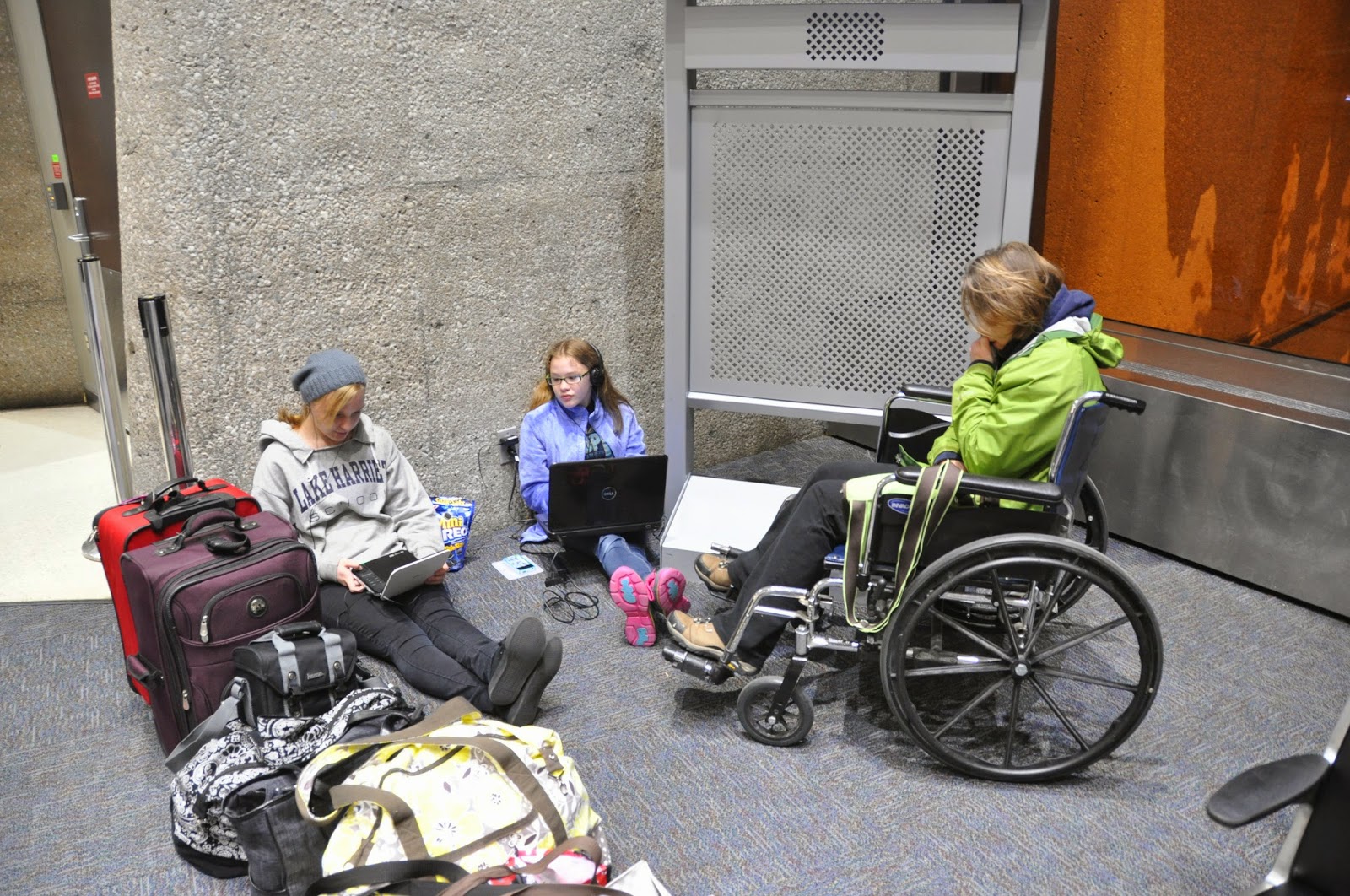 I slept most of the flight (thank goodness), except for several trips to the bathroom! My friend Lesley picked us up (I would have hugged her, but I'm sure she would have been scared to come near me), and I crawled into my favorite bed ... I made it!

The girls asked to sleep in, so we gave them their wish. They woke up to pancakes being made in the kitchen of our Hostel, right next door. It brought back college memories; cooking a meal on a hot plate. 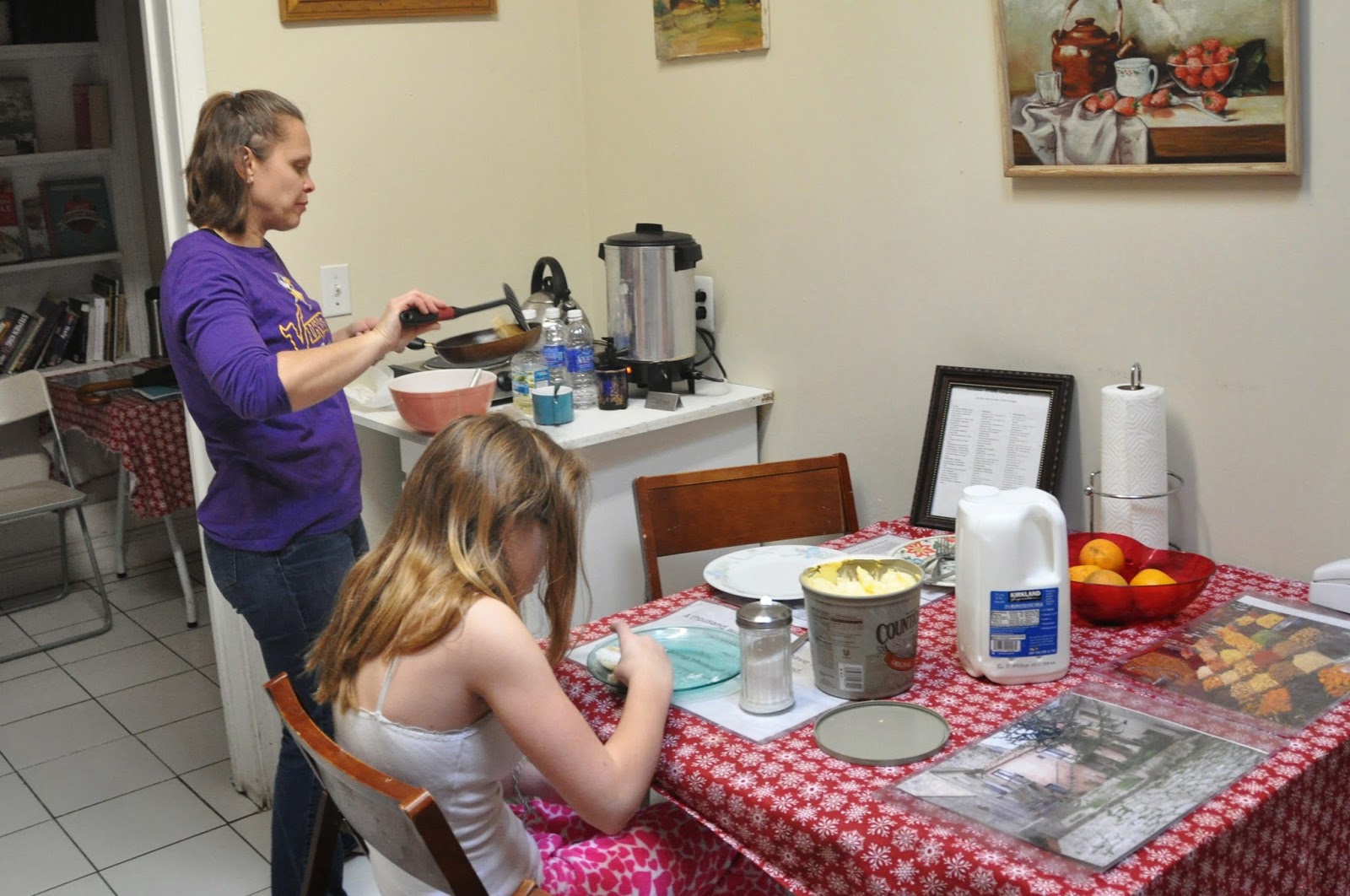 We rode the Metro, and made a stop at Barack's home (AKA The White House). 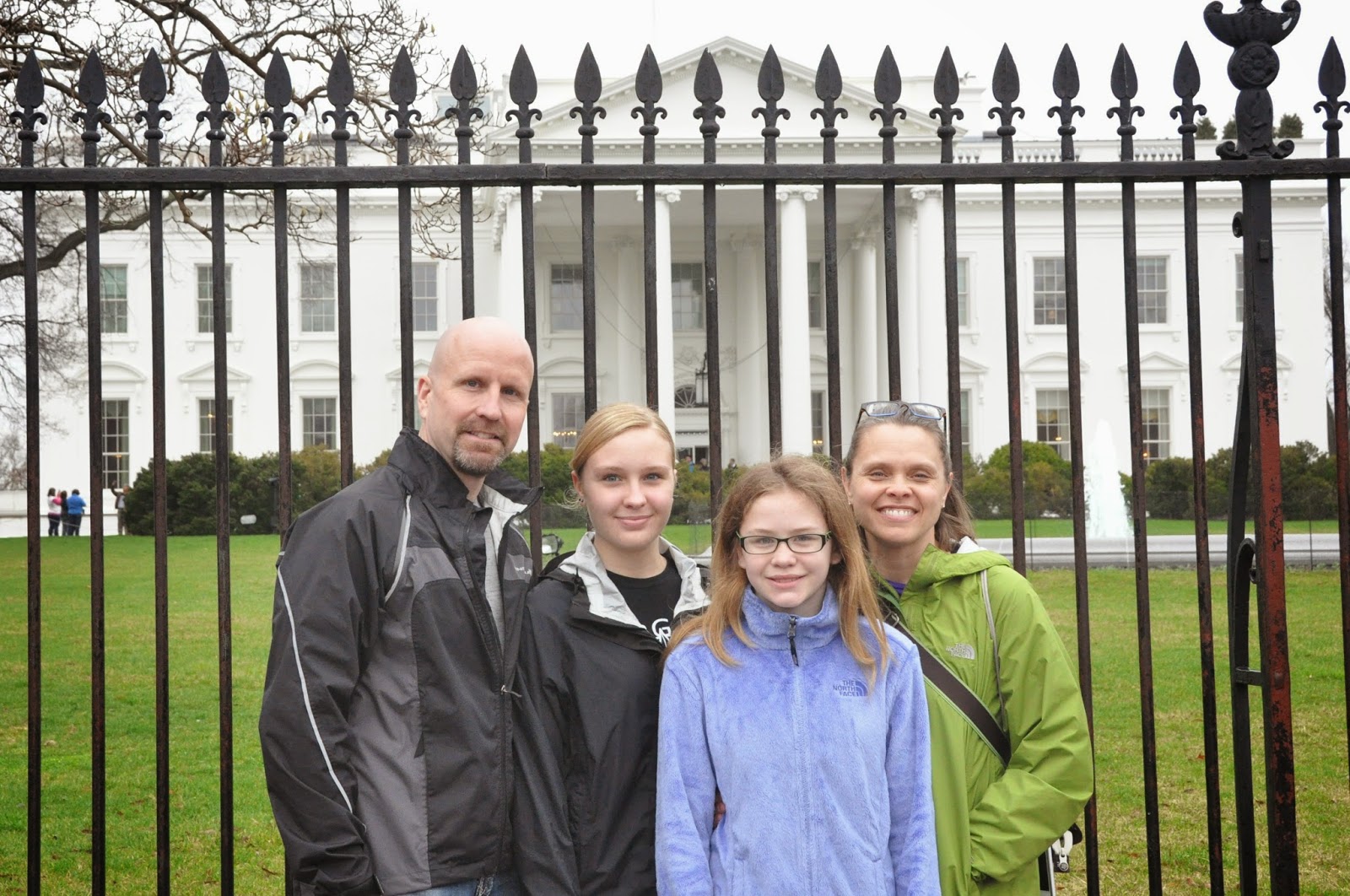 Our plan was to rent bikes, and explore the National Mall in 'Vandeputte Style' (AKA efficient). But it was raining, and no one was super motivated about getting soaked. So we decided to hit the Smithsonian Museums instead. On our walk, I saw Paradis running ahead and kneeling on the ground. It took me awhile to figure out what she was doing ... 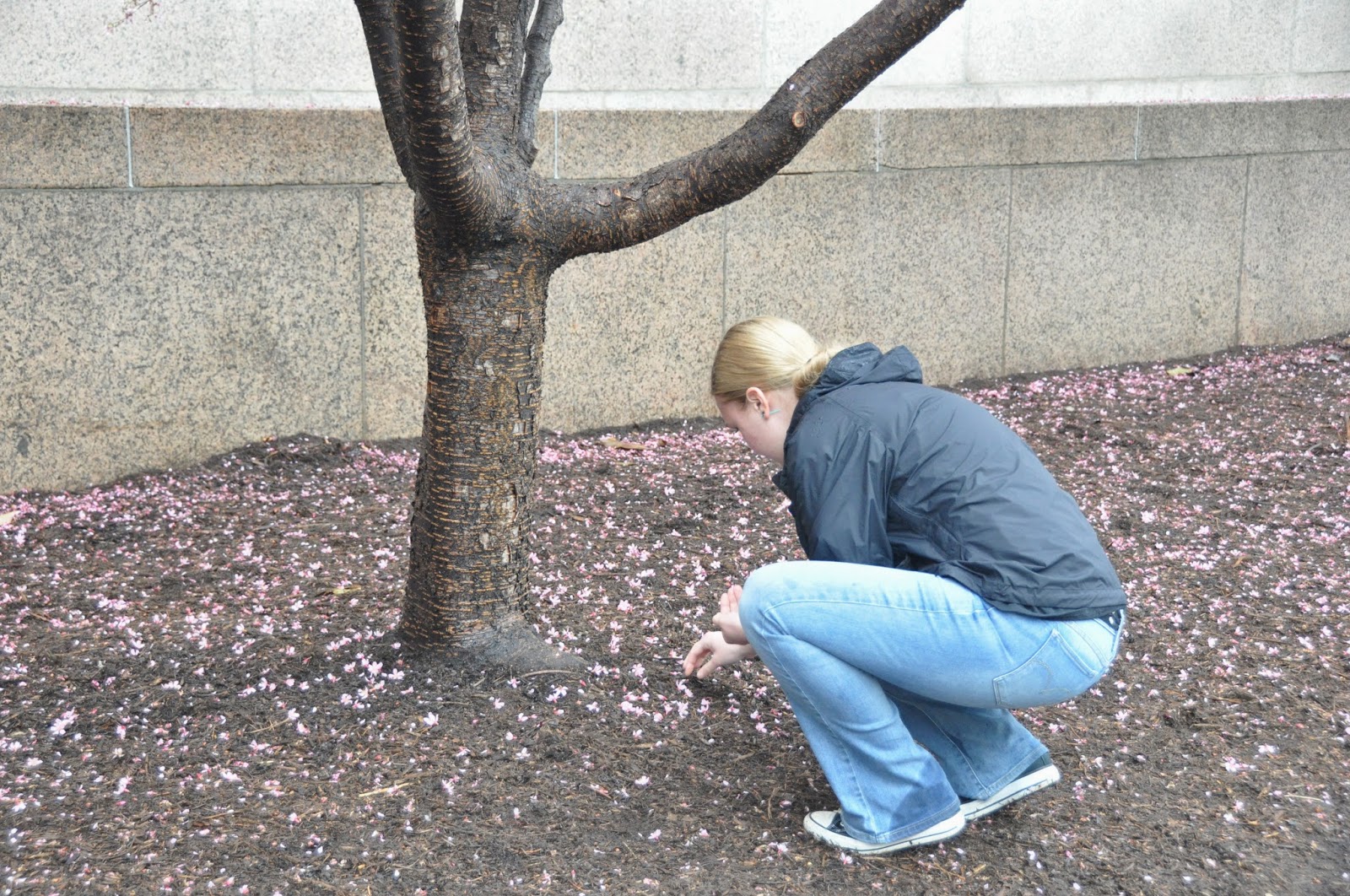 I've always wanted to see the Cherry trees bloom in Washington D.C. A month ago, it looked like I would get my wish since the Cherry Blossom Festival started today! But the weather wasn't cooperating with my plans, and most of the trees were not blooming. Needless to say I was a little disappointed. However, while walking, Paradis spotted a couple trees and began collecting blossoms for our Collection Jars. It is illegal to pick the blossoms, or trust me I would have went home with a jar full (I'm sure that law was made for people like me). 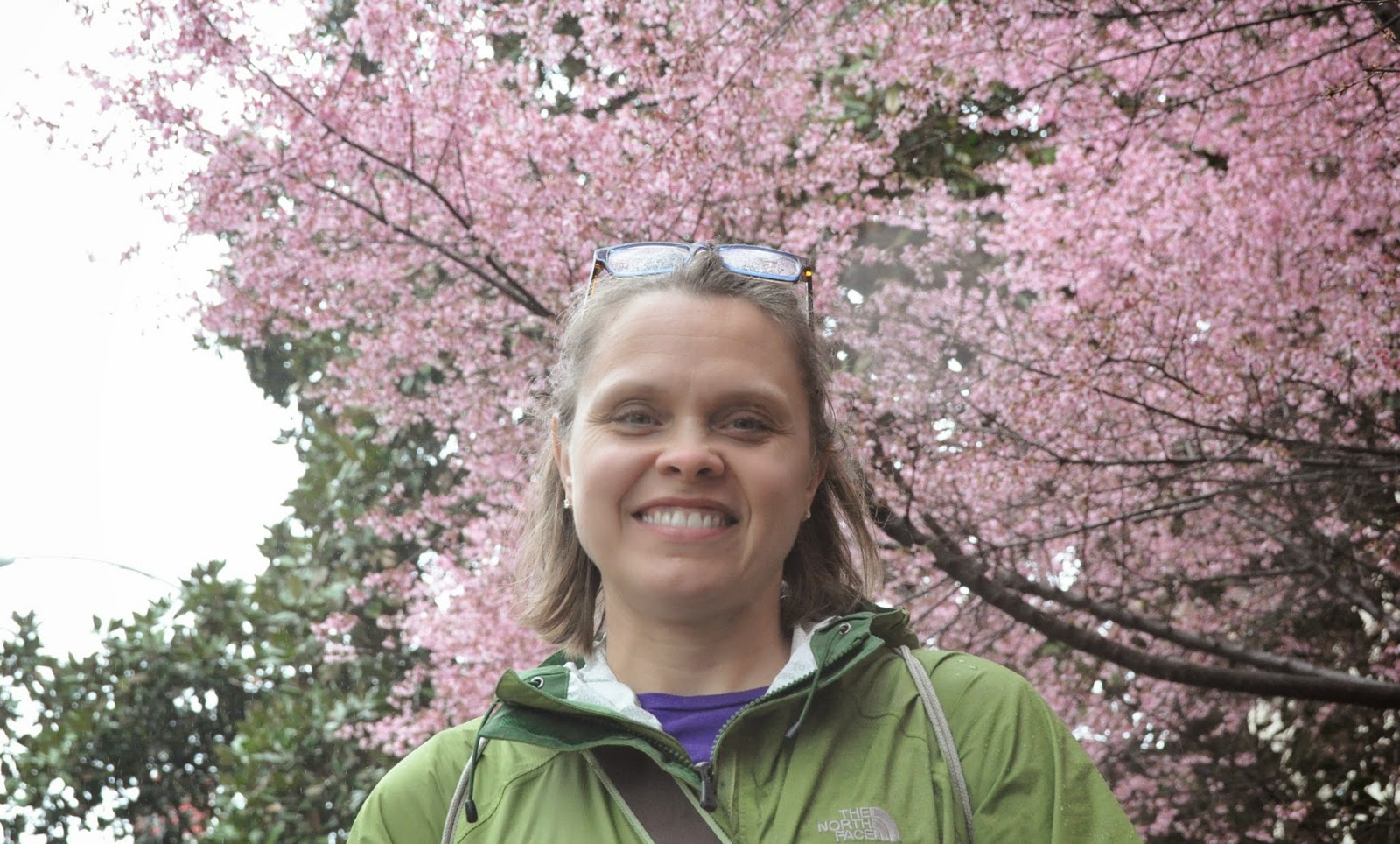 We went to Smithsonian's Museum of American History. We saw Julia Child's Kitchen, Dorothy's Ruby Red Slippers, the actual flag that Mary Pickersgill sewed in 1813, and so much more. We were hoping once we left the museum the rain would have stopped, but no such luck. We walked to the National Park station at the Washington Monument (still closed), and the main Ranger Station on the mall to buy souvenirs. We were soaked, so we decided to give it up for the day and head back to the hostel. Check out my pants ... 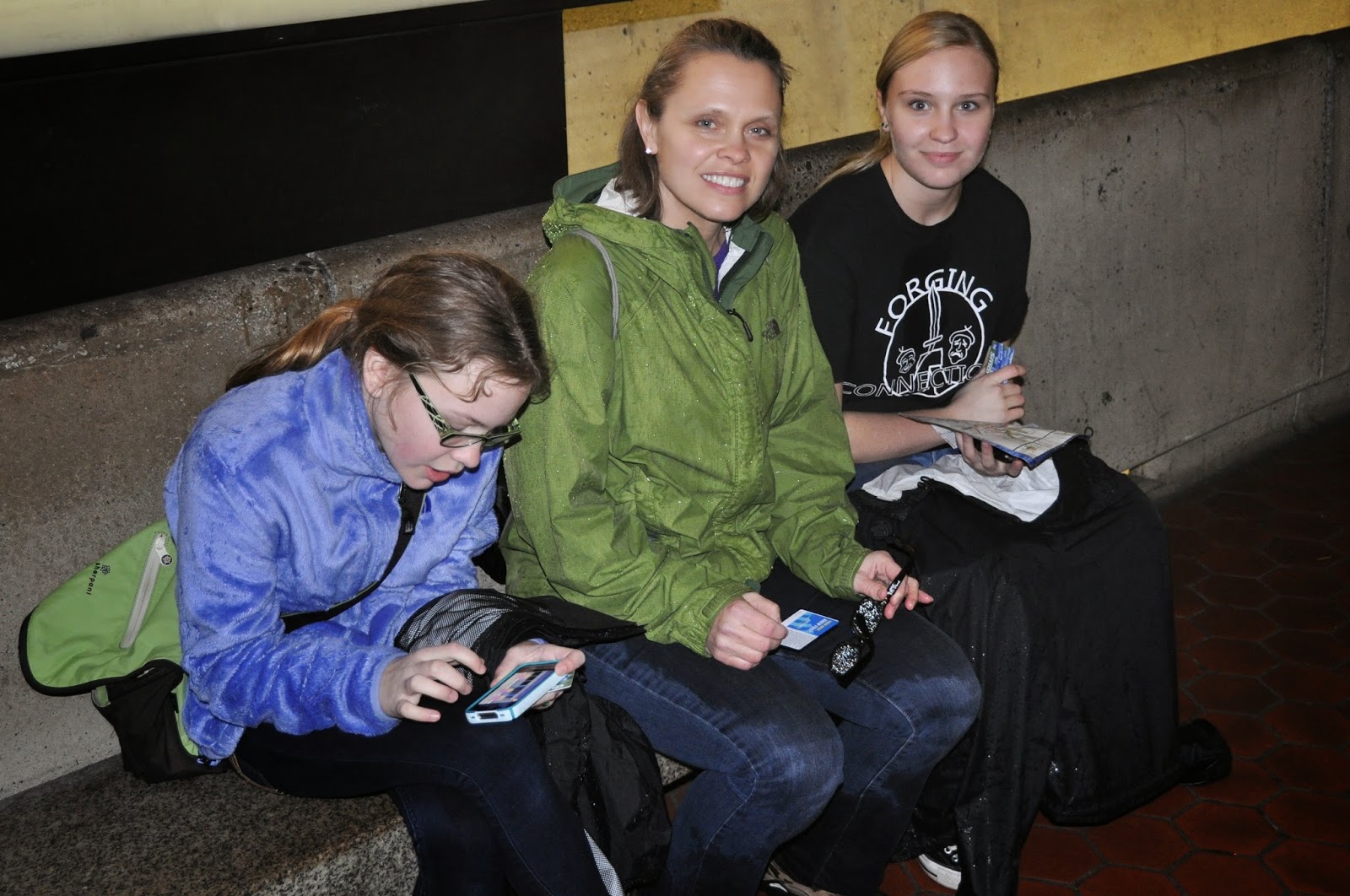 We got back to the Hostel, and Annelies made us all Smack Ramen. Yes, on the hot plate. Such important skills these trips give my children! 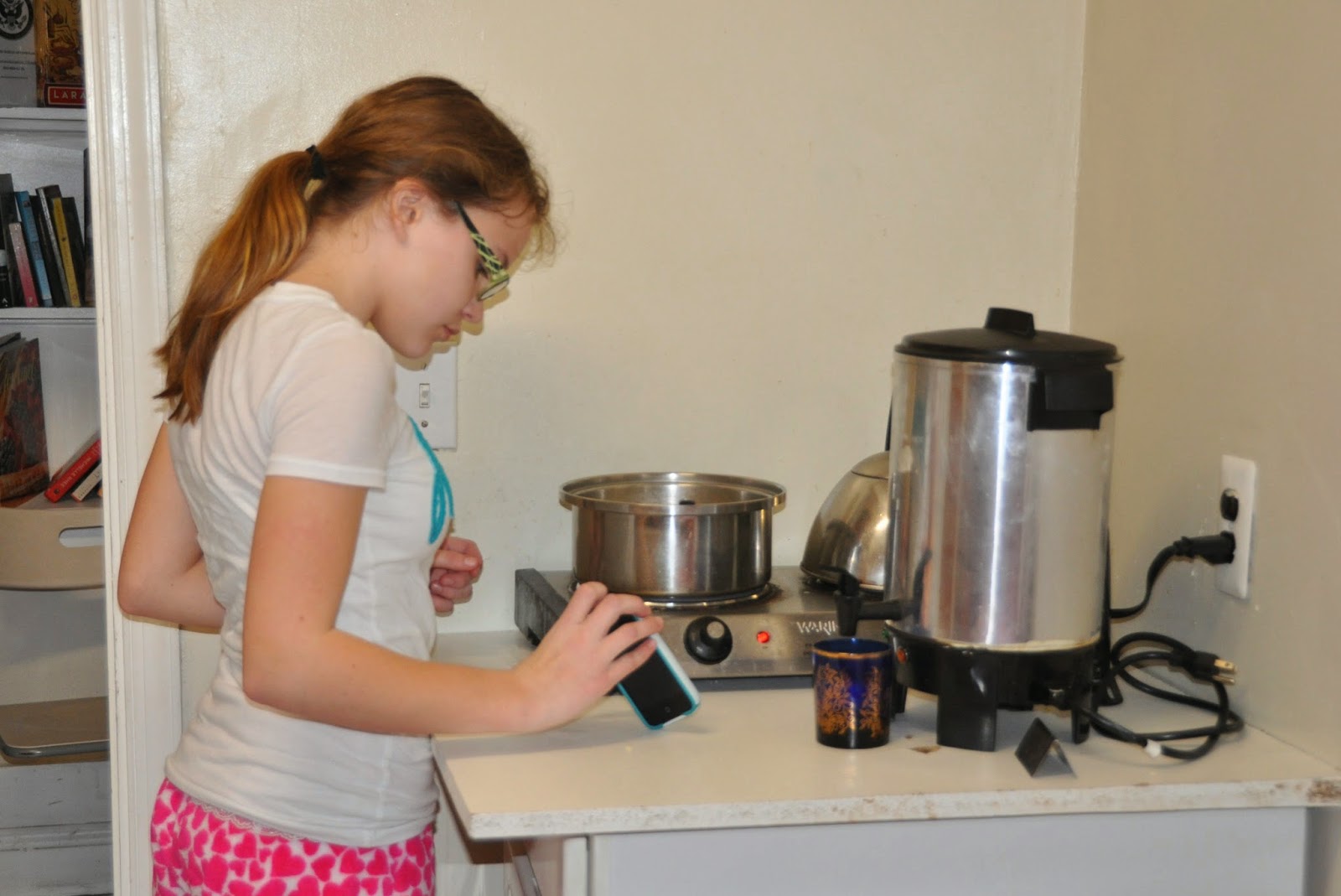