I'm moving to California my friends! Holy shit! I signed a lease in San Jose, gave notice to my current apartment, booked a flight out September 30, sold my car, and set up my forwarding address! I'm pretty committed at this point so I guess it is time to write a post.

I have lived in Minnesota my entire life. I often wonder if part of my wanderlust is because of my strong desire to live somewhere else. After having children I set 2021, the year Anna graduated from High School, as my first opportunity to move. So, why San Jose? Why not? I'm an overthinker so this decision was not made lightly but I must admit every time I looked at another city San Jose would call my name. My plan is to move often, so I don't have to love it, but things that drew me to San Jose were:

The Plan. Twelve (12) years ago the documentary "The Story of Stuff" had a huge impact on my life which kicked off my journey toward a more minimalistic and purposeful life. Of course I didn't throw out everything I owned the following day but the more I read about minimalism and the more I practiced the lifestyle the more addicted I got to experiences and connections over possessions. My plan is to put less than ten (10) totes into storage, fly to San Jose with two suitcases and ship a couple boxes. I'll let you know how well that plan executes after I move.

no·​mad | \ ˈnō-ˌmad : a member of a people who have no fixed residence but move from place to place usually seasonally and within a well-defined territory 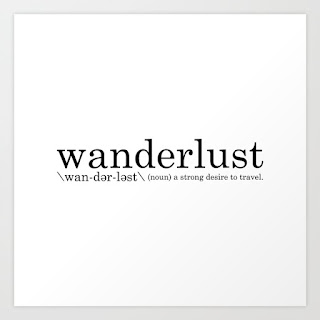 I read a book this week People We Meet on Vacation by Emily Henry. It is a love story, with a wanderlust twist, that I have been anxious to read while sitting on my libraries waiting list for ten weeks! Poppy and Alex have nothing in common. She’s a wild child; he wears khakis. She has insatiable wanderlust; he prefers to stay home with a book. I could relate to Poppy as she lusted for travel and making new connections. The last couple chapters Poppy realized her wanderlust was because she was running away from the fear Alex (and others) would reject her. I read those last few pages repeatedly because they spoke to me. I struggle with the fear of this fear myself. Note I said "the fear of this fear". Consciously I do not believe I'm running away from something but so many people (close to me and strangers alike) ask me often "what are you running from"? I always respond "how do you know I'm not running toward something?" But I admit, I'm really unsure. I have such a strong drive to wander I can't imagine this is wrong. Maybe I'll meet "Alex" in a pair of khakis in San Jose. I hope he is bald.

In case you are wondering, I've created Ten Steps to Moving as a Nomad: