An early morning departure put me at the bus stop in Melbourne at 0600. I rode to the airport, boarded a flight and landed in Alice Springs early enough to get an idea of this little town in the middle of the Australian outback.

I took a shuttle to my hostel - Alice’s Secret Traveller’s Inn. It is a cute hippie-like hostel, and I’m fairly confident I’m the youngest resident. I jumped on a bike and made my way 4km to the Telegraph Station Museum.
Side note: My goal this trip was to get better at simple metric conversions. I’m getting there...4km = 2.5 miles. The temp was 34.4°c (90°f)...you don’t need a conversion chart to figure out is was hot. Freaking hot.

The Museum was interesting. The effort to get telegraph lines strung across the country, during that time, was such a huge undertaking. It would take the same amount of time today just to get permits and discuss the politics of construction!!
It was a simple museum but it was worth the visit.

Alice Springs was the first white settlement in central Australia. The comparison of actions toward the aboriginal people is so parallel to that of the states. When the Telegraph Station closed in the 30’s the government used it to board ‘half-caste’ children, encouraging them to follow that of the whites, thinking it would be better.
I rode my bike through town and did some shopping. Alice Springs have everything you could need even a Target!
I returned for a shower, and went on a tour of the Kangaroo Sanctuary. This is the home of Kangaroo Dundee - a documentary done by the BBC. Wonderful man trying to do good for the kangaroos. The Joeys are so damm cute!

After the tour I returned to Alice’s. I nearly lost my breath when I walked into one of the most magical gardens I’ve seen. The photo does not do it justice but if I were in my mid 20’s, had a bit more energy, and didn’t need to wake at 5am I would be out there right now. Beautiful.

I was a bit tired when I crawled out of bed this morning. It was a short night. But time is ticking and this is my last day in Melbourne. Tony, Deb and I drove into Victoria Market. It is a lovely market with all of the regular stuff. I had some oysters - and if you know me you know I'm not a seafood lover but I survived.


After the market I went on a boat ride down the Yarra River that runs through the middle of the Central Business District. It was really nice. Melbourne is such a beautiful city.

I took the train back to Brighton and joined Deb in making gnocchi. It was wonderful. I think my apron helped with the rolling.

I finished the evening washing my clothes, scheduling a ride to the airport, packing and watching another episode of Married at First Site - I may need to find this online once I leave.

My time with Deb, Tony and the boys was fabulous. I feel so fortunate to have spent the time with them in their city. Melbourne itself is absolutely wonderful. I'm adding it to my list of 'cities where I want to live'

Day six started off early waking at 5:30am. I’ve found it is a good time to connect with my girls (note: we have a 17 hour time difference). I decided to jump on a bus tour for the day. First good thing about traveling solo: Easy to get a last minute booking.

I took the train into the CBD (not the kind you smoke but the Central Business District). I joined Bunyip tours and our first stop was Moonlit Sanctuary where we had lunch and fed wallabies! It was crazy. They are super soft and docile (probably because it is freaking hot here). I figure I’ll sweat the ice cream off  today.

Our next stop was Churchill Farm on Churchill Island. It was a working farm (e.g., cattle and sheep) which was very familiar, but the views were not - spectacular.

Next stop was the Koala Santuary on the island and we saw a koala on the move! Very unusual I’m told. He was inches from me!

Next stop was Cowen Beach for some food. I had dinner with my new friend Michaela from Germany (currently living in Oklahoma), a couple G&Ts and ice cream. Second best thing about traveling solo: Making new friends.

Next stop was along the coast to see the Nobbies. It cooled down a bit and started to rain. But we got lucky.

Our last stop was to watch the little penguins return to their nests from spending a day or more in the ocean gathering food. No photography allowed but let me tell you, they were freaking cute (although it wore me out  watching those poor things make their way up the shore - they looked exhausted)!

I’m currently on the bus returning to Melbourne. This was a wonderful tour and would very much recommend. Our tour guide Ian was wonderful and we saw such a nice variety.

Day five I slept until 9am and had a yummy breakfast of Vegemite on toast! It is an interesting salty spread that tastes great with eggs. 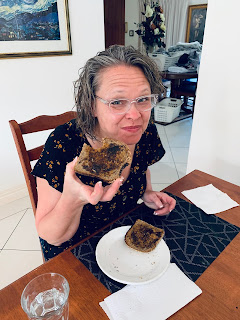 We ventured into the city via the train and went on a Street Art Tour. It was good, but freakin' hot! At the same time I was walking down the street with sweat dripping into every crevice imaginable Annelies and Paradis were texting me saying school was closed back home due to the cold - crazy! 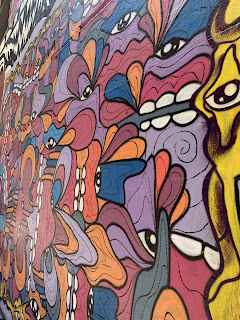 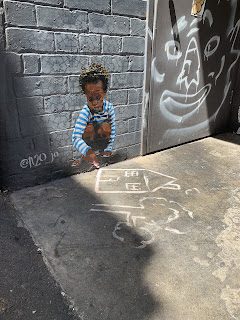 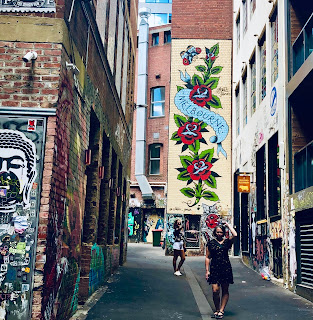 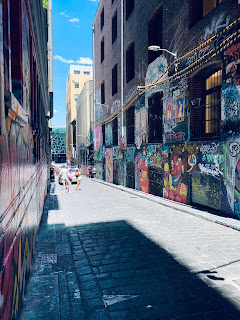 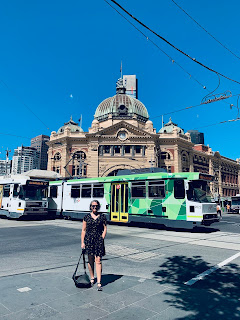 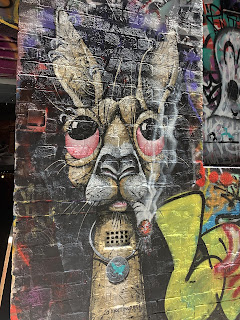 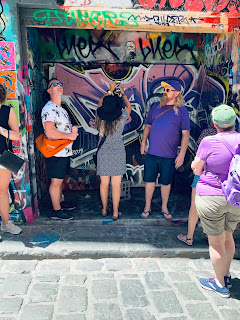 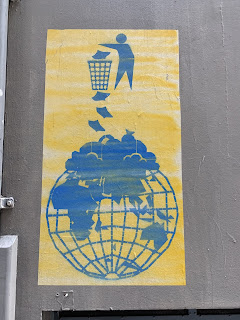 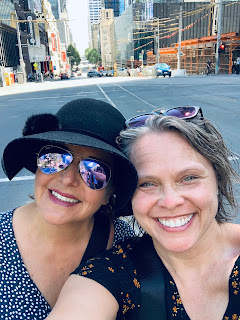 Once home I took the second best shower of my life (the first being day one) and enjoyed another great meal by Tony of sausages on the barbie. We ended the evening watching the next episode of Married at First Site (#MAFS). Crazy.

I started day four with this postcard in mind... 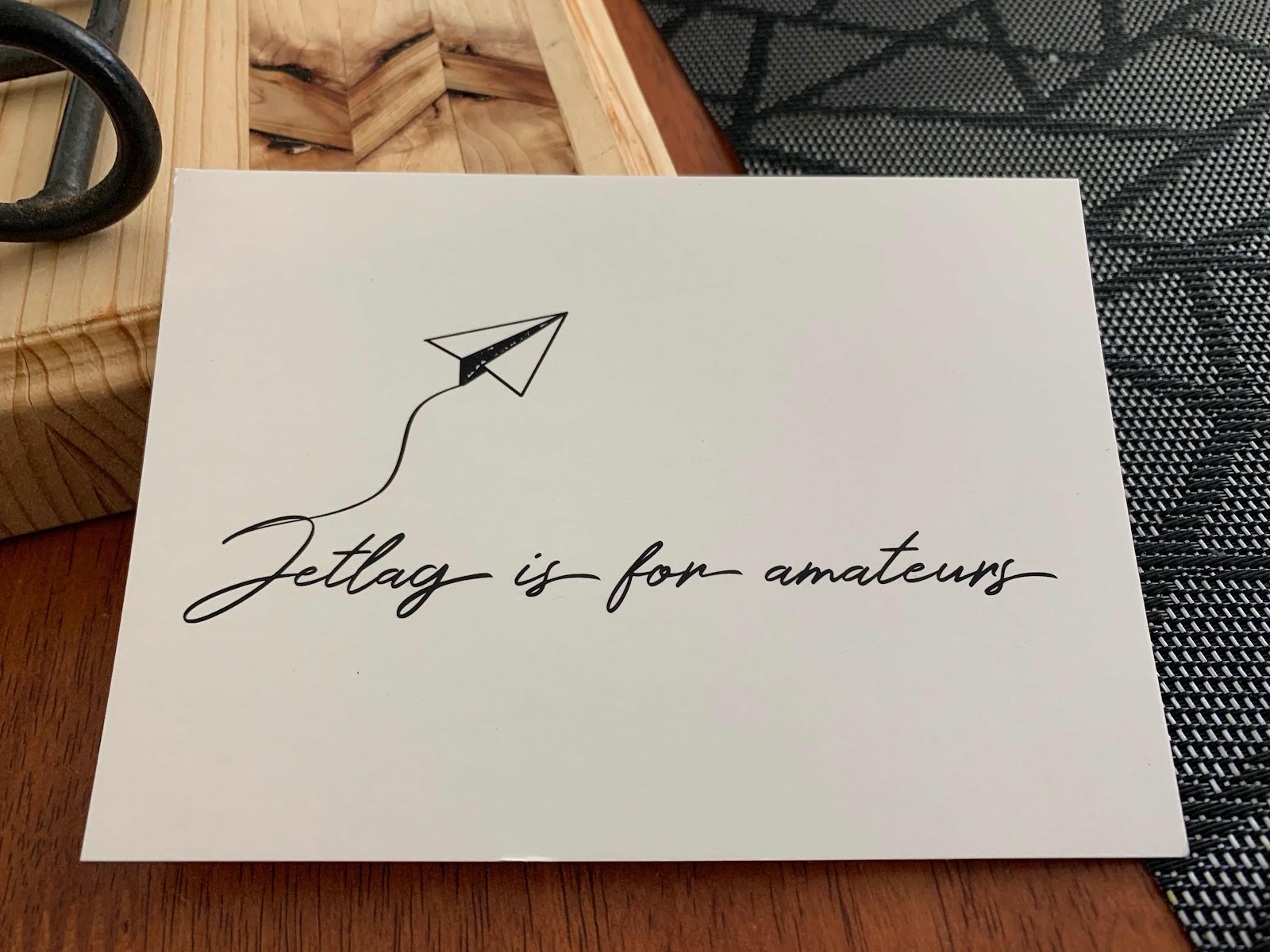 We drove to Rye to Deb and Tony's beach home and made our way to the ocean. It was gorgeous. 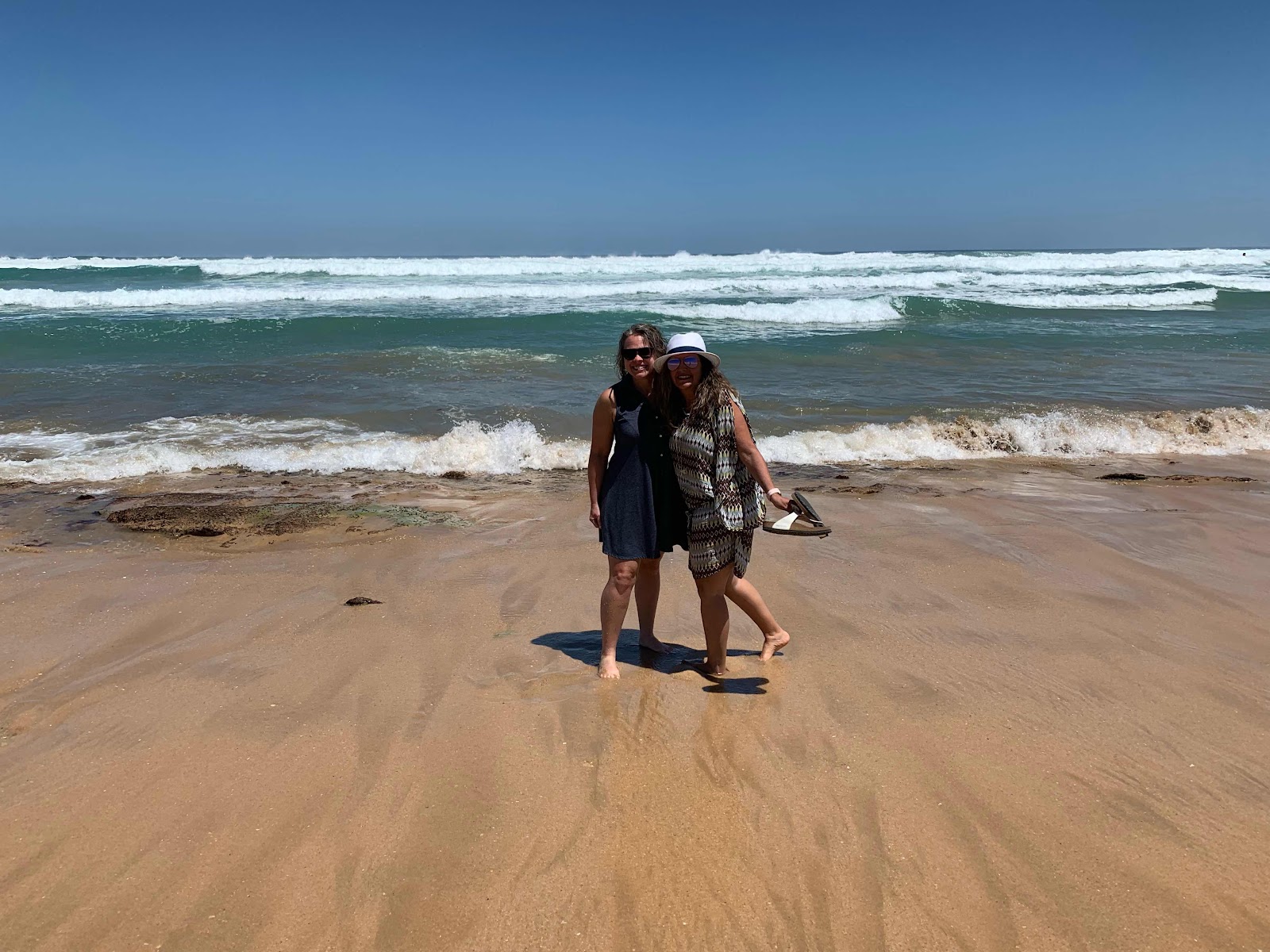 We made our way to Portsea and had a lovely lunch at Portsea hotel. We went on a walk along the ocean. The weather was absolutely perfect. 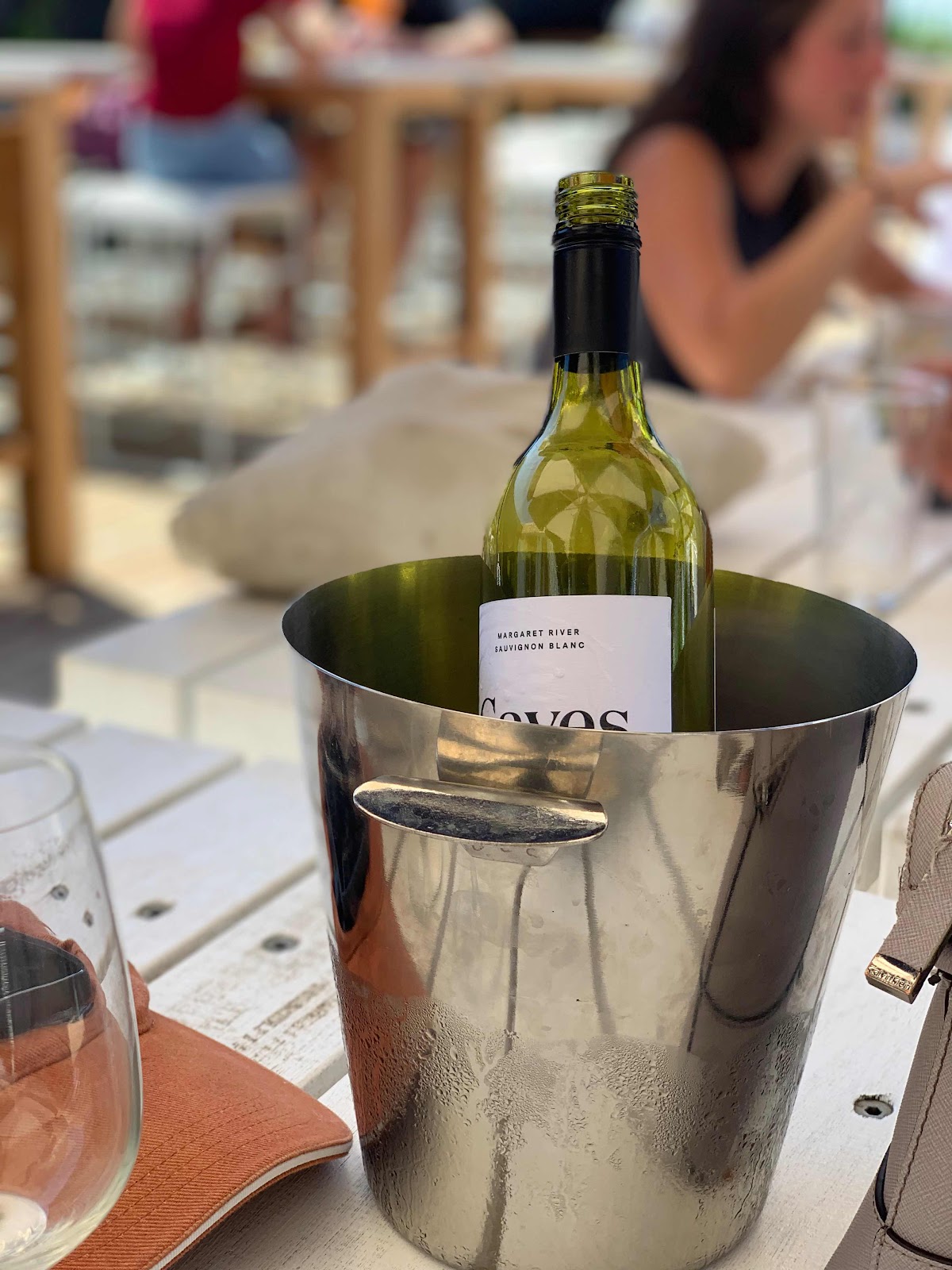 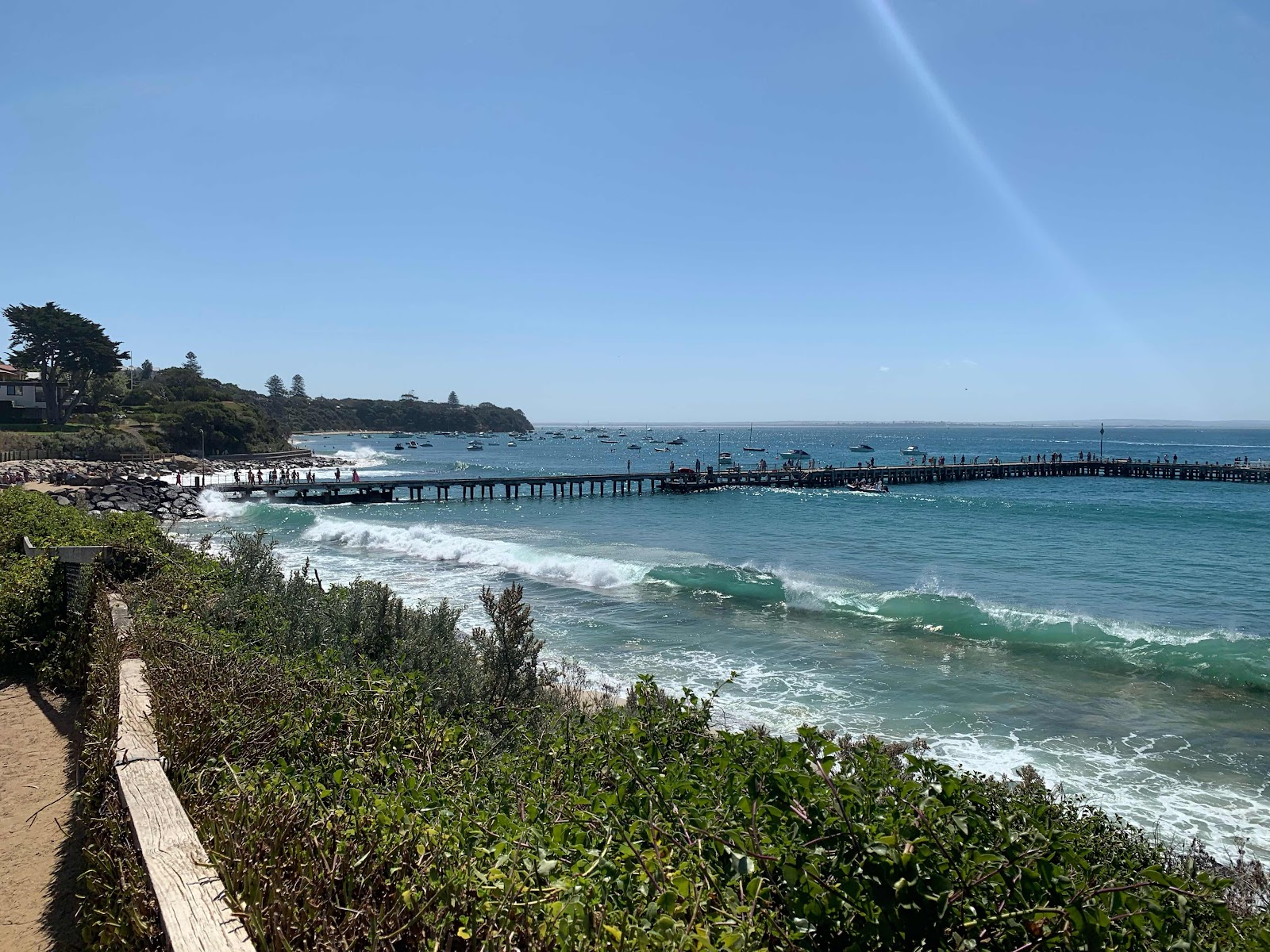 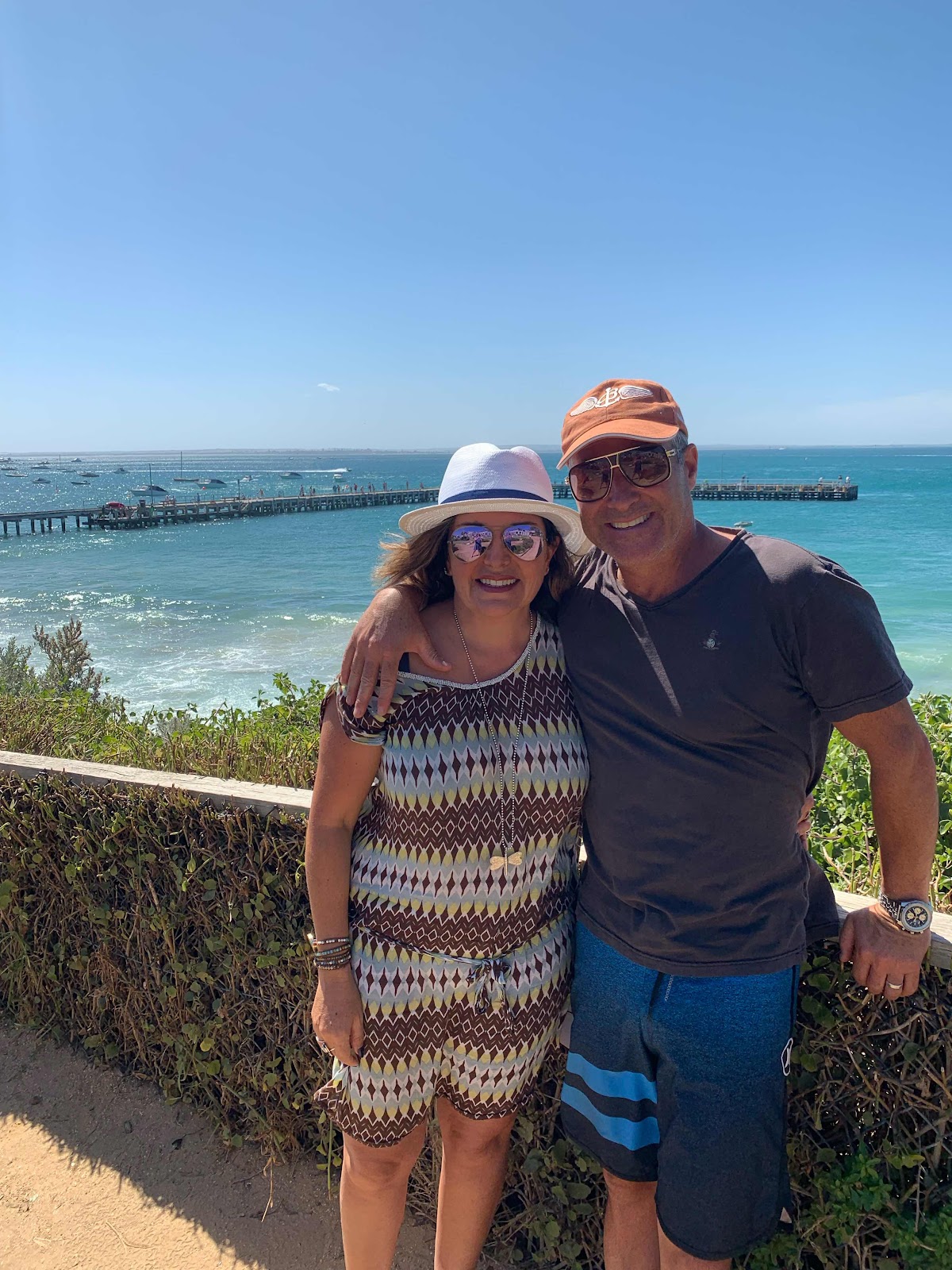 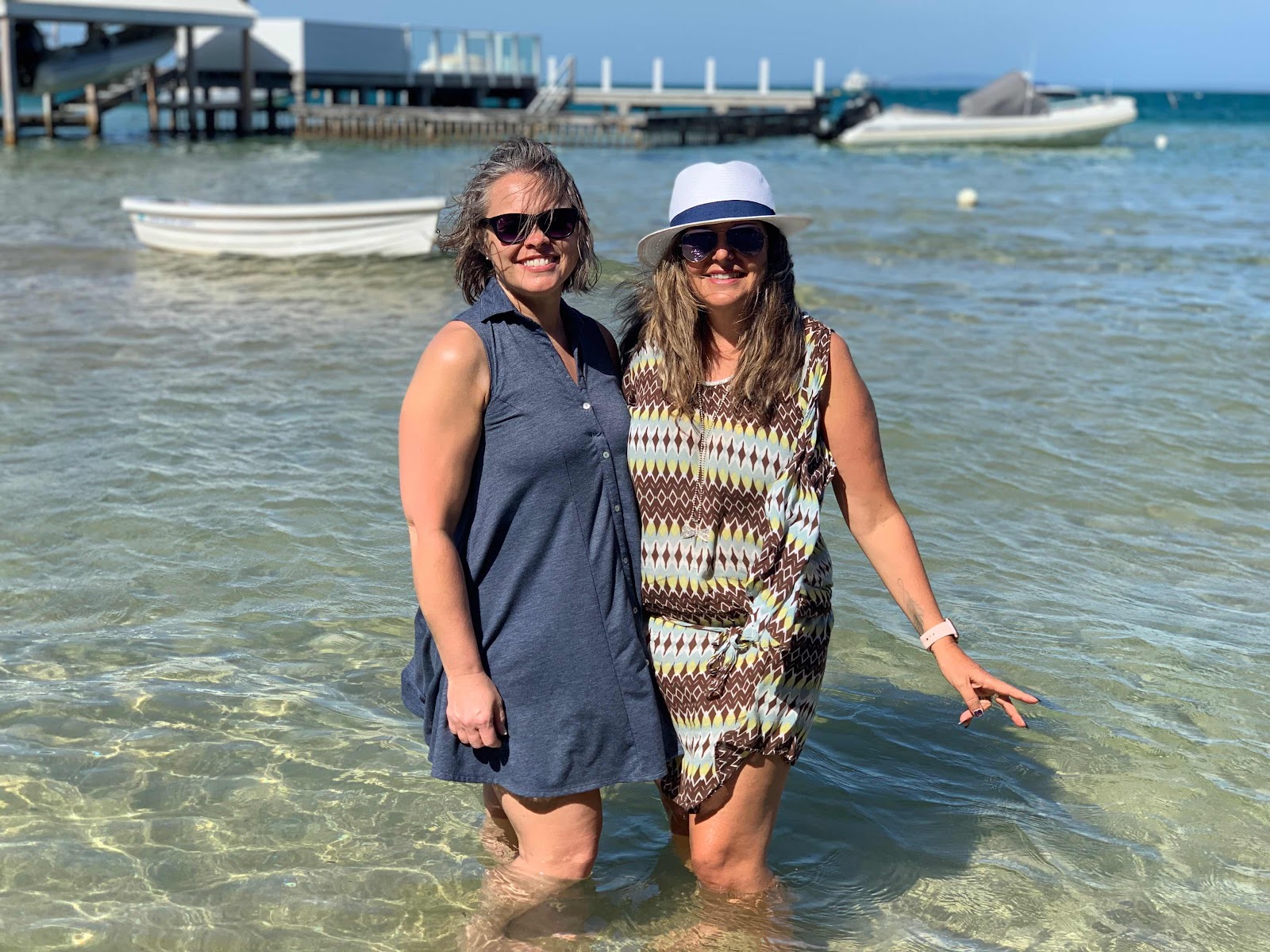 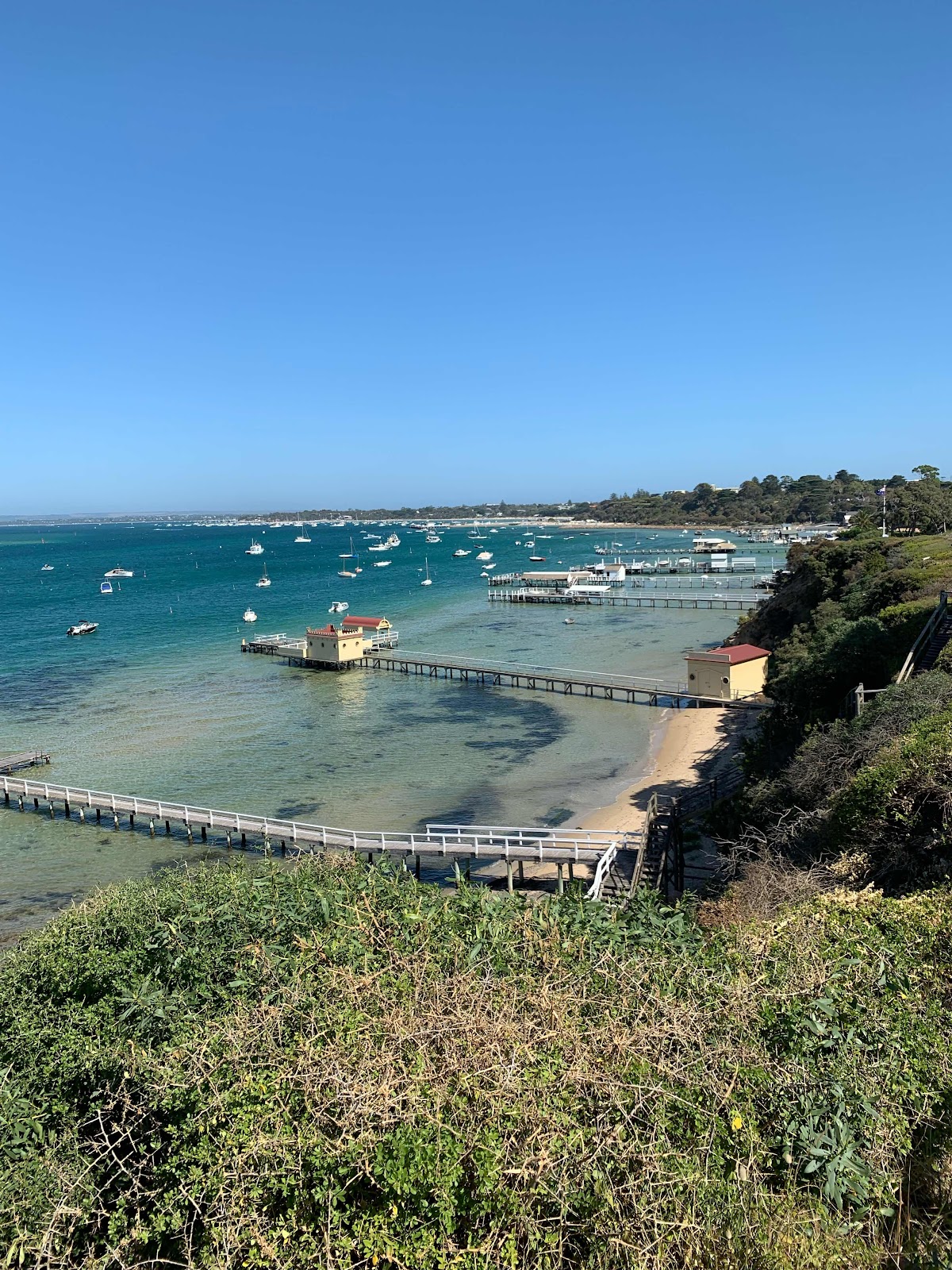 On our drive home we saw a kangaroo!! It was in a field of cattle. He is tiny in this photo as I was fumbling out of the car to catch a glimpse, but Tony was able to snap a shot for me. 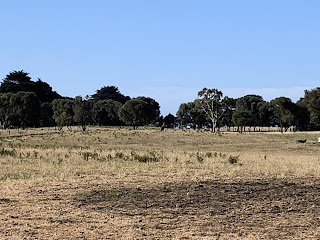 We ended the evening watching Married at First Site (#MAFS) - a show where professionals set up two individuals and the first time they meet they get married! Crazy weird...I think I'm a bit addicted.