When we originally planned this trip, we thought we would wake up early Saturday morning, get to the Derby around 6:00am, and be the first in line at 8:00. After spending the day at the Oaks, we changed our strategy. Instead we slept in, the girls swam a little, and we arrived at Churchill around 1:00. 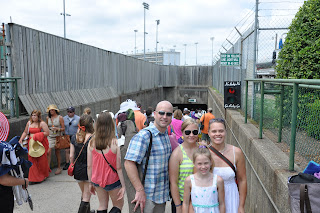 After walking through the entrance gate, we proceeded down the tunnel that took us under the track, on to the infield. On that short journey, while pushing our way through the crowds, Annelies said, “Any kid that spends a day here will need at least a year’s worth of weekly therapy!” Yesterday we counted four kids at the Oaks. Today we counted two, Annelies and Paradis, and they were stars wherever we went. The guy below asked to get a picture of them. He thought we were weird; he was wearing a taco suit (it was Cinco De Mayo)! 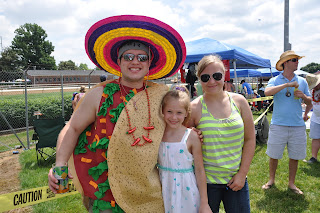 Today our goal was to find a seat near the racetrack (done!), bet on every race (done!), and stay put (done!). The crowds in the grandstand area the day before were crazy, so our plan was to avoid it. We talked through all the races, wrote down our bets, and Scott and Annelies placed them in one shot. We weren’t planning on standing in line again. It was super, super, super hot and the crowds in the infield were enough. 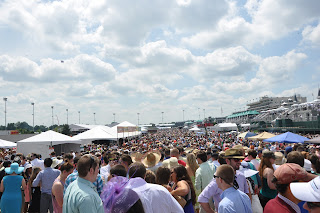 But after race #10 we learned Scott picked the Exacta, winning $403.16 on a $4 bet! Woot woot! We were pumped. Annelies and I returned to the Waging Window and cashed in our winning ticket. We were up $316.The girls were feeling lucky. 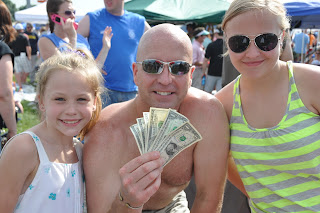 As 6:24 drew near, the crowds around us got thicker and thicker. We were definitely a group of misfits; I was knitting, Paradis and Annelies were under the age of 21, and Scott was sober. Men would say, “Can I get a picture of you, I’m confident I’ll never see another women knitting at the Derby!” 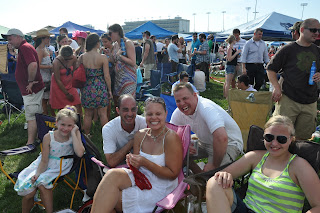 Annelies started giving out advice; how to calculate odds, ways to pick a good jockey, and the strategy of betting on long shots. 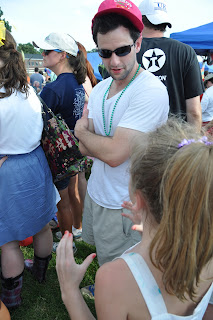 The excitement in the crowd was electrifying as we waited for the race to start. We watched the horses exit the starting gate on a large screen, and soon after saw them flying by us at unbelievable speeds. Everyone around us was talking about their bets, trying to figure out if they had won. We felt fortunate horse #11 didn't win, as the guy behind us said he would strip naked if he crossed the finish line first. Here is a photo I took of the winning horse as he was warming up in front of us … #19, I’ll Have Another. 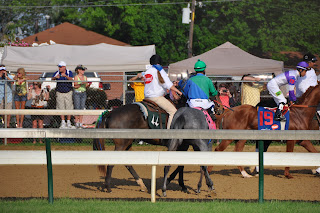 Overall the day was a ton of fun. We won a little money, survived the ‘cultural’ experience of the Derby, Paradis checked an item off her Bucket List, had a 13th birthday she will never forget, and Scott and I got bit by the ‘Derby Bug’. We all agreed, if we didn't have a laundry list of places we want to visit, we would come back.

We are now on our drive home. This will be my last entry, as we will arrive late tonight and need to return to the real world tomorrow. For all my 'statistic' fans, I'm sorry but I didn't keep up with receipts on this trip and won't be publishing final stats. Next trip, I promise. Thanks again for following us. We will see you at Canterbury!