Day five was another day in Glacier. Our second goal while visiting Glacier was to see ... well, a glacier! This is not the best time to see Glaciers in the park as they had 150% snow coverage this past winter. All the glaciers are currently covered with snow - which is a good thing to help preserve them longer, but doesn't allow the Vandeputte family to see one up close. Of the 150 glaciers that existed in the mid-19th century, only 24 exist in the park today, and they estimate they will all be gone by 2030. So I wanted the girls to see a glacier on this trip. You can typically hike to Grinnell glacier, but not today - or maybe not even this season due to the large amount of snow. But we all saw two snow-covered glaciers today and have photos to capture the moment ... 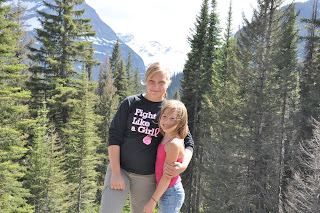 We started our day in St. Mary park just north of East Glacier. We boarded a boat which took us for a ride on Lake Mary allowing us to see Sexton Glacier as well as a couple islands on the lake up close. We docked near Barring Falls and joined another Ranger Led hike through two falls; Barring Falls and St. Mary's Falls. We were told another mile up the path was a third water fall that couldn't be missed, Virginia Falls. So we ditched the group and headed onward to a site that was just spectacular. Scott and the girls hiked close and got soaked as I shot some photos ... 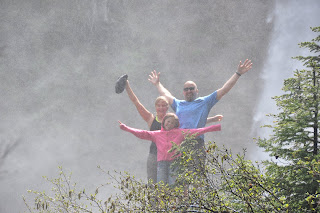 We settled down for a picnic at the base of the falls and enjoyed the view. 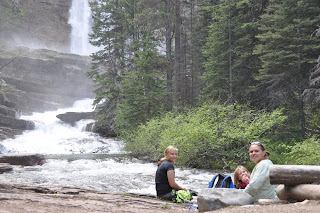 Since we had ditched the Ranger Led group earlier, we were on our own to catch the boat for the return  trip. We noticed it was 1:25 and although had originally planned to catch the 3:00 boat back, the girls wanted to try and make it to the 2:00 boat so we could gain an extra hour in our day (I just love those two!). So we started running ... and kept running ... and running. Everyone we past along the way just starred at us like, "Aren't we suppose to be enjoying this hike through nature, not speed through it?". One couple yelled "Overachievers!". When we got near the boat dock, and Scott yelled, "It is 1:50, we can make it," the girls kicked it into third gear and left Scott and I in the dust. We arrived sweaty but excited that we would gain another hour in our day just to find out that a boat wasn't scheduled to return at 2:00! No kidding ... we ran all that way to sit for an hour waiting for the 3:00 boat!! 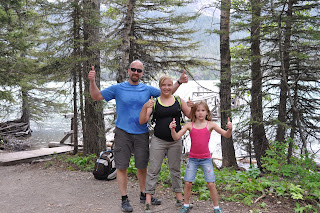 After catching a little siesta on the boat dock we boarded the Joy II with Captain Pete and headed back toward St. Mary's Visitor Center. Scott, Paradis and I sat in the back of the boat, which was outside. Annelies went up front to visit with Captain Pete - we all said simultaneously, "God help him!" Minutes later I saw Captain Pete standing in the aisle, not at the controls. My heart started beating a million miles an hour when I couldn't find Annelies anywhere. As my eyes quickly scanned the crowd I finally caught her in this position ... driving the boat! Oh how I love that girl!!!! 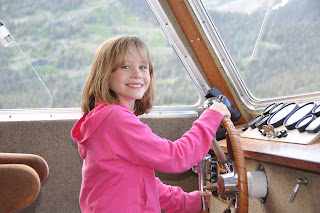 After eating at Johnson's Diner in St. Mary (as suggested by Captain Pete), we drove back to our Cozy Cabin, took our required showers, downed a little Ibuprofen (as a couple of us were a little sore from the run!), lit a few fireworks (only those that wouldn't shoot in the air!) and went to bed. It was yet another great day in Glacier.

[After reading the draft of this entry to my traveling team, Scott was surprised to find out I hadn't included the fact that Captain Pete was hot. OK ... so he was! Just another wonderful view to enjoy while traveling in Glacier Park.]