Day one of our Southwest Adventure was a complete success. We landed in Vegas, Nevada our 29th state.

Our goal for Vegas, was to give the girls a taste of Sin City over the 12 hours we had to enjoy it. We gave them some options, and the girls chose Gold and Silver Pawn Shop, a gondola ride at The Venetian, dinner with Gordon Ramsey, the Bellagio Fountains, and M&M World. We had lots to do with very little time.

We made a straight line for The Gold and Silver Pawn Shop. Some of you may know it from the TV series Pawn Stars. They were filming when we arrived, so we waited outside for 45 minutes. Paradis saw Chumlee drive away as we were about to enter; bummed she didn't see him face-to-face, but she was excited. When we got in they were still filming the 'after shots'.

We checked into The Venetian, and went for a gondola ride. As we 'rode down the canals of Venice', Scott and I shared stories with the girls about our wedding night 18 years prior. It wasn't as romantic, but it also didn't stink as bad as the real canals!

Paradis loves cooking shows, and Gordon Ramsay is a star in her world. So I surprised her with a reservation at Gordon Ramsay Steak in Paris, Las Vegas. The food was fabulous, and it isn't often the four of us eat at a 5-star restaurant. Annelies was a trooper ordering buttered noodles and french fries, but when I made the reservation at 7:45pm I didn't realize that would be 9:45pm 'our time', and she was tired by the end of the meal.

We walked across the street to see the Bellagio Fountains. 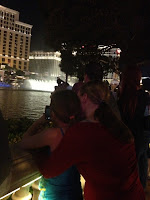 Annelies fell in love with The Venetian. She especially liked the bathroom, which she calculated six people could get ready in at the same time. The TV helped make it more enjoyable, but did delay her getting ready (although we didn’t have to remind her to brush).

Just before going to sleep, Annelies wrote the following note next to her bed (with a broken pen) which I found in the morning … I think she had a good day in Vegas. We all did.