The girls slept in until noon. We have definitely shifted down a few gears while visiting the Rockies. We are staying in Estes Park, at the foot of the Rocky Mountain National Park, and you can tell this is a summer town. A lot of shops are closed, and the park is nearly empty. We are enjoying the solitude.

The elk are abundant around here. You see them everywhere, including in the middle of town!

We entered the Park, and drove every road that was open, as many are closed for winter. I bring a tripod on every vacation, as photos are a priority for me. I've seen these photo posts at a couple National Parks, and just love them … I’m thinking about starting a ‘picture post movement’. Wouldn't it be great to have these installed at each and every touristy photo op?

Note: Annelies isn’t in the photo again; I think she is getting sick of being with the three of us, as she refused to get out for the shot.

The kids, including Scott, couldn't help but engage in a snowball fight. The snow was absolutely perfect for snowball making, and you can’t play in snow while wearing a t-shirt in Minnesota so they took advantage of it.

We stopped at the biggest gift store we have ever seen in our lives. We must have spent an hour in that place. It was actually very nice. The girls squeezed into a little cubby they had for the kids.

Our friend Lesley has spent many summers in Estes, and told us about The Stanley Hotel. The Stanley Hotel hosted the horror novelist Stephen King, inspiring him to write The Shining. Scott is a huge Stephen King fan, so we stopped to get a picture. Scott and Paradis playing the part …

When Annelies heard the photo opportunity had to do with killing, she got out and posed by herself. This is her stabbing someone. Nice, huh?

We had a fabulous Mexican dinner at El Mex-Kal (the margarita could have helped the positive review), and ended the night at Estes High School watching a production of Rent performed by the students at Eagle Rock, an alternative High School in the area. We love supporting local theatre, and our favorite musical is Rent. I would play it for the girls when they were infants, to soothe them to sleep, so I think it is in their souls. The students were awesome! 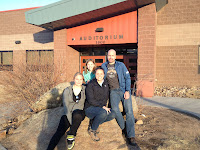 Tomorrow is our last day at Rocky Mountains National Park, and our last full day of the trip, as we fly out Sunday. This has been a good ride …