Day One of Alaska 2017 is complete, and I am so happy to be back on the road with my two favorite travel companions. The day started with an easy ride to the airport. We recently moved back to the city, and our new home is two train stops from the airport. Did I plan this move so my effort to the airport would be easier? Yes! Absolutely!!

We enjoyed an uneventful flight directly to Seattle, with some stunning views along the way.

We arrived in Seattle, and took the train downtown. I love, love, love public transportation. Cheap, and it immerses you in with the locals. 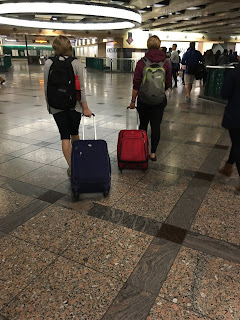 We checked into Ace Hotel. OMG...we love this place! Once before I had written that Paradis wanted to return to a place for her honeymoon (Congress Hall in Cape May). Ace Hotel has now been added to that list. In the heart of the action in Seattle, an older hotel with a cool vibe. It reminds me of my travels through Europe. 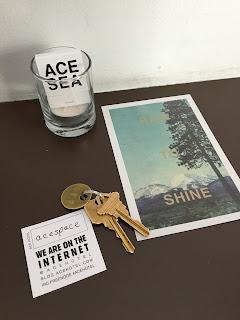 Our first stop was Chihuly Garden and Glass Museum. It is located near the Space Needle, and is amazing. Paradis took some awesome photos.


After Chihuly we walked back to Ace, and it hit me that I had stayed up a bit too long the night before. So we shut the blinds, and took a short nap. I love naps. We woke, and took the bus to the pier, where we boarded a boat to Bainbridge Island. 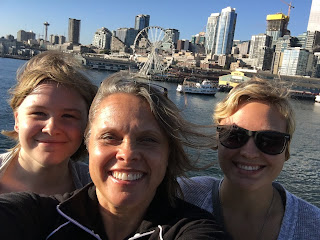 I knit, and my favorite knitting store in the world is Churchmouse Yarns & Teas. The girls have heard me talk about it for years, and I wanted to show them my obsession. I am confident they do not feel the same, but it was fun to be there with them. I connected with my friend Kelly, and bought some yarn that I didn't need. It was magical.


We returned to Seattle, where we picked up some ice cream and a couple tacos. We settled back into Ace, and fell asleep. It was a GREAT first day.

I often share my blog URL with others as we travel, and today it occurred to me I really haven't shared much about the start of Driving the Dream. So here it is...since 18, when I left the small little town I grew up in on the north shore of Lake Superior, I wanted to travel. I would longingly look at RVs driving alongside me on the highway, and dream I was a part of their tribe. Driving the Dream started with a thought I would drive through all 50 states in an RV when I retired.

I married when I was 27, and traveled extensively through Europe with my husband Scott. We started having kids, and after a couple trips to Europe without them, we shifted our focus to the United States since we hadn't seen much of the country ourselves, and it seemed easier with kids (and I missed them horribly while we traveled).

From 1999, when I had my oldest, until 2008 we didn't focus our travels on hitting every state. We just traveled to where we wanted like regular Americans...Florida, California, etc. It wasn't until 2008 when I became obsessed once again with getting an RV and traveling to all the states in one shot. I asked myself "Why wait until I retire to do this?" Driving the Dream began.

I spent hours looking at home schooling the kids, making a living from being on the road, the most efficient routes, what kind of RV we will buy, etc. It consumed my world for many months. Scott talked to his employer about taking an absence from work for three months, and we started planning an RV drive through the lower 48 over the summer of 2010.

But life happened. Scott got a new job, and that approved absence from work went away. After some long ugly cries I pulled on my big girl pants, and shifted my focus to simply seeing all 50 states before my oldest left home (2017). Simply. But not really. In hindsight, it was the best thing that could have happened to us. It has allowed us to focus on each and every state, and take our time enjoying everything around us.

I sat down, and put together a lose Master Plan. I chunked out trips, usually going on two every year (Spring Break and over the summer). Sometimes we would fly in to one city, drive across country, and fly back from another city. Sometimes we would rent an RV. We have done just about everything, because seeing 50 states in six years takes planning.

Scott and I divorced in 2015, and the girls and I continued. This trip will take us into Alaska, our 50th state. The official end to Driving the Dream. I must admit it is a bit emotional for me, because when I first started saying "we are seeing all 50 states before my oldest leaves for college" it seemed like an eternity away. She is leaving for college in 27 days. Yikes.

But I will tell you, my dream was realized. This dream was about more than just visiting all the states. It was about exposing my daughters to my love for travel. It was teaching them how to have a dream, put together a plan, and make it happen. It showed them that there are different people out there, not just midwesterners. It showed them the beautiful backdrop of America, that includes more than what they see in Minnesota.

Somehow, along the way, many of you have joined in on my dream. As of today, this blog has received over 42,000 views. I have received emails from mothers saying I helped them see the reality that this can happen. I have had friends tell me they travel because of the motivation they received from me. Those are outcomes I didn't realize were part of my dream, but I love.

The purpose of this blog will always be to document this dream for me, and my daughters. We read through it often, and I have a feeling they will continue to read through it as they grow. Happy travels everyone!