Day Six of Alaska 2017 started early when Paradis' alarm went off around 4:30am. The night before I could hear the girls talking about waking up to see the sun rise. I was sleeping, but smiled when I overheard them say "We should wake mom up too. She loves that shit." Well, neither of them woke when the alarm went off. But I did. The girls were right...I love that shit.

The Captain drove us into the Endicott Arm, a narrow passage along southeast Alaska. We landed right next to Dawes Glacier. Our Cruise Director, Dan Dan, told us this was the closest they have been able to come all season due to lots of ice breaking off the glacier (called calving). I am not sure what to believe...there is a lot of marketing that goes on during a cruise. But the views were spectacular. Since we only had thirty minutes to observe the glacier before we turned around and returned to the wide open sea, the girls had to get up early to make the trek up to deck 14.


We went to the Windjammer cafe where we had breakfast, overlooking a beautiful glacier. I am sure everyone has heard that food is the highlight of any cruise. I would like to think simply hanging out with my girls is the highlight of my cruise, but food is a big part of our scheduling. The Windjammer is Explorer of the Seas buffet location. It is open nearly all day with a couple hours for turning around to the next meal. The buffet is extensive, and always has something to please. Even Annelies. 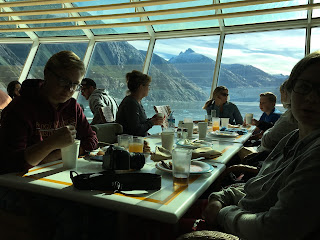 We returned to our room to shower, and I tidied (some people call it cleaning, but I like the word tidy so it doesn't seem like I am obsessed with cleaning; but I am). Paradis and I went to a napkin folding class. We had been at this same class thirteen years earlier - I wish I had photos. She was much more cooperative this time. I so love this girl.

We had lunch (more eating), and simply hung out around the ship. At 6:30 we went to a magician show, and then off to dinner. The girls have enjoyed eating in the main dining room every evening. I was wrong to assume they wouldn't. I do not like to say Annelies is a picky eater, but she limits what she eats. I know that sounds the same, but it is a mother's hope that she will try new foods some day. I think that day has come, and I am thankful. 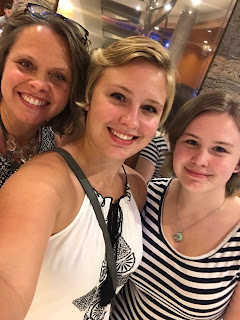 After dinner I went back to the room to sleep (I was up at 4:30am, remember? With no nap!), Annelies hunkered in next to me with her best friend Netflix, and Paradis dressed up to head out for the night. I have no idea what she did, but I hope she had fun.

Day six of this trip will be spent cruising at sea. The girls have highlighted a crap ton of things they want to do. We will see what time they wake... 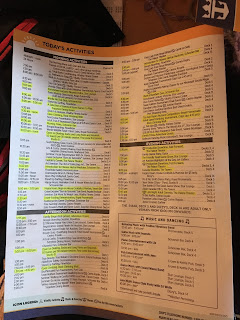