Day five of Alaska 2017 began with more amazing views. I woke a bit early to update my blog while the girls continued to sleep.

We docked in Skagway Alaska around 6:30am. With a lot of effort, the three of us were up, showered, fed, and off the ship by 9:30am (note other days we were up by noon). We hopped in a van for a thirty minute ride to...I have no idea where. This whole cruise thing is weird for me because I have no idea where I am at any moment in time (and lack of wifi doesn't help since I can not enable my gps). I just let those that know better lead me. I do not like it.

We arrived on property owned by our tour group. It was beautiful, and landed us next to the 'flats' that Jack London described in Call of the Wild (note to self: read that book again). 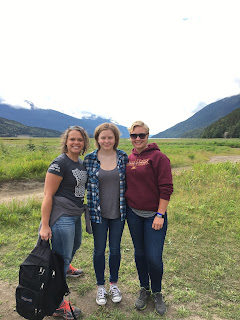 The salmon are all spawning (laying and fertilizing eggs) right now. It is crazy to visually see all of them on the surface of the water. Did you know that all salmon die once they lay or fertilize eggs? And when they are young they migrate into the ocean, and return to the same spot they were born (usually four years later)? Crazy.

We boarded a contraption that would bring us straight up the mountain in record time. It was a fun ride, but the woman behind me didn't think so ("Seriously, he is going way too fast", "Why doesn't he slow down?"). 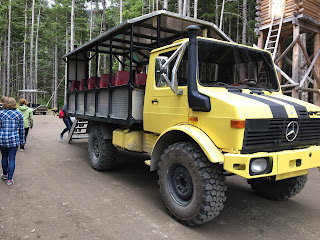 We arrived to a clearing in the woods where dogs were happy to see us. We hopped aboard a 'golf cart' of sorts, and were pulled by a dog sled team of sixteen through the woods. It was fun. Our musher talked to us the entire time about her dogs, and racing. After our ride we spent some time with the dogs. Paradis was in heaven. 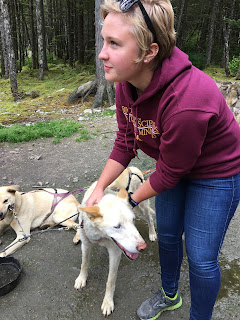 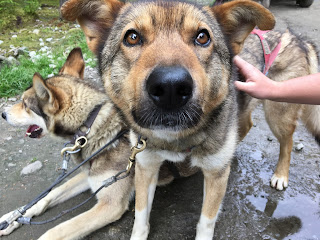 We drove a bit through the woods and stopped for some photos. Our tour guide likes selfies too! It is truly beautiful here. The photos do not do it justice. During the tour I met a woman, Kate, who came on a cruise last year and decided to retire and move here - she now works for a cruise line driving a bus into the Yukon. She said Skagway hasn't seen sun for four weeks. It is still beautiful. 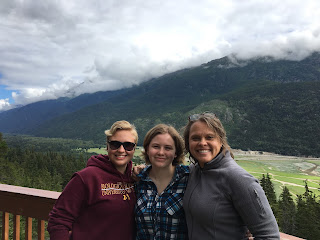 After a short talk about sled dog racing, the girls were 'released' to spend time with the puppies. 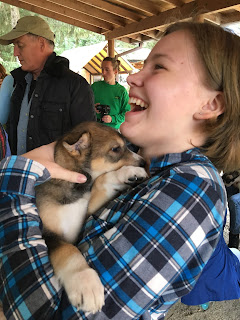 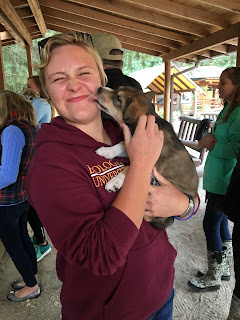 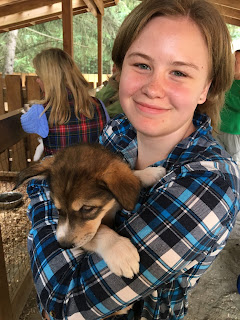 This was a great tour. It was through Alaska Adventures, and I would definitely recommend it. The tour guides were spectacular; funny, and informative. I guess you really need to have a passion for this kind of stuff if you decide to move up here and do this.

The bus dropped us off in downtown Skagway, where we had a salmon lunch. Annelies wasn't feeling well, so I walked her back to the ship. By the time I returned for Paradis, she was ready to return as well so she went back. I wondered through Skagway by myself for a couple hours.

The National Park Service owns over twenty buildings in town, and is restoring them to the gold rush days. This whole gold rush thing is amazing to me. In 1896 three people discovered some gold, word spread, and within two years over 100,000 people came through Skagway attempted to hike over 500 miles in pretty horrible conditions (yep, you read that right) with the goal of reaching Klondike and becoming rich themselves. Only 30,000 even made it to Klondike, and of those that made it only a handful ever became rich. The Klondike gold rush lasted two years before gold was found in an area with easier access (Nome Alaska), and people realized chances were slim one would get rich from the risk. It is crazy what a little rumor does, isn't it?

I returned to find two sleeping girls. The puppies wore them out. 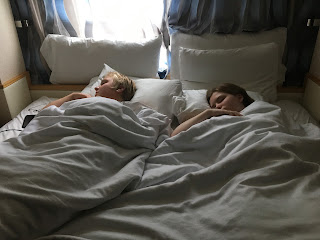 I went and had dinner. When I returned they were still sleeping so I passed out myself while reading. I slightly remember the two of them getting up and discussing waking at 4:30am to see the sun rise. Lets just say I was up at 4:30am this morning writing this blog post. Stay tuned for tomorrow's update...

If you are a regular reader of Driving the Dream you know I usually do stats every night. The stats include money we have spent, fights, injuries, as well as number of Redbox movies we rent (Netflix has replaced that fix). I have been asked by several people "Where are the stats for this trip?" Since we are cruising, we do not have 'daily' expenses, so it hasn't been as easy to track. But here goes a financial summary of the trip (I must admit part of the reason I haven't done this is because this is a big one for me...as a frugal traveler, this trip ate into my traveling budget a bit):

Financial Summary of Alaska 2017 (as of day five)

I am not going to include the $158 the girls racked up in cell phone chargers, during the middle of our first night, before we realized we should have our phones in airplane mode so it doesn't connect to the ship's cell service. Yikes. I started to log into my own cell phone account to see if I was charged the same, but stopped...I will deal with it when I return. I am on vacation after all.